Inside the Design of the Air Jordan XXXII

Jordan Brand had lined up a set of Maseratis and Alfa Romeos in front of the NH Lingotto Hotel in Turin, Italy for the group of journalists that had made the trip east. High beams blaring, classical music on the stereo. One by one, with the summer sun already set, they roared up a parking garage, hitting 40 miles per hour around sharp turns.

On the final turn, the cars arrive on a rooftop with an NBA-sized basketball court to the right and a big red bubble above. But we picked up speed before we pulled over. Lots and lots of speed. With the only considerable light in the rearview, suddenly a curved racetrack appeared and each of the Maseratis and the Alfa Romeos punched it, creating a mini rollercoaster. We went around a few times with the windows down and the wind howling. 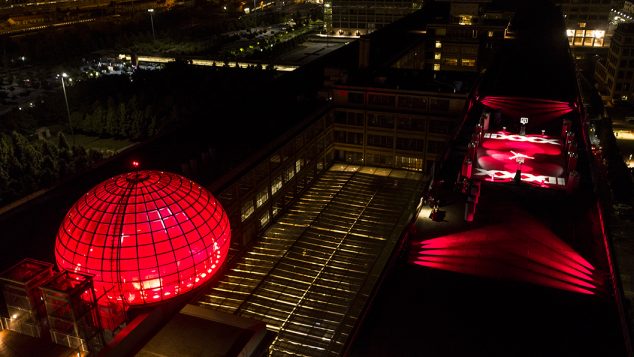 Finally the cars pulled over and let everyone out into the cool evening air. We were quickly shuffled up towards the glowing red orb. Tate Kuerbis, Senior Footwear Designer for Jordan, David Creech, Creative Director for Jordan/Senior VP of Design, and the Air Jordan XXXII were waiting for us. 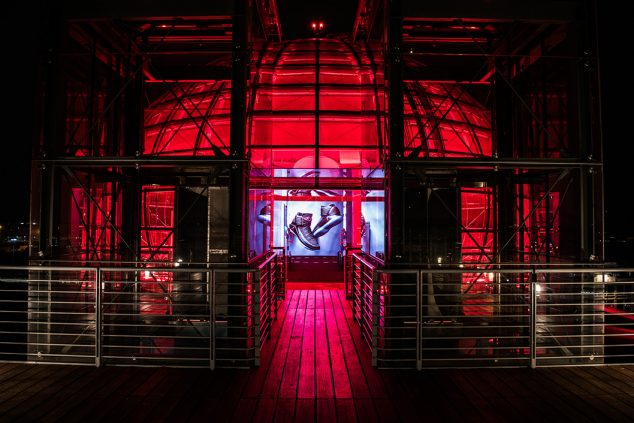 After a brief presentation from Creech and a performance by Les Twins, Kuerbis held court, dishing on how he and his team made the XXXII.

“Before we put pen to paper, we go and see Michael and just have a conversation,” he said, nonchalantly. “When we’re having the conversation, we’re lucky enough to go to MJ’s house and we get to go out into his garage and he always has Italian sports cars in his garage. Seems like he gets a new one every year. I don’t get to be around those cars very often. When I do get to spend time there, it’s fun to open the door and sit inside. If you look at the details—the craftsmanship, the smell of the leather, even the detailing on the steering wheel—[it] really inspired where we wanted to go with the design of the [XXXII].”

The Air Jordan II was designed with inspiration from Italy and it was manufactured there, too. The Italians had figured out how to properly mold an innovative sole unit that designers Bruce Kilgore and Peter Moore wanted to include in the II. Creech now refers to the II as a “luxury basketball shoe” because of its high-quality leathers and composition.

Kuerbis wanted to capture the essence of the II and give it a modern construction for the latest Jordan release. Enter Flyknit. The high-tenacity Flyknit has become a staple of Nike’s products in the last five years. It’s light, but supportive, and it allows for a multitude of color combos. It’s been used on Kevin Durant‘s and Kobe Bryant‘s signature sneakers, as well as the Nike Hyperdunk. But it hadn’t been used on a Jordan Brand basketball silhouette.

“To be honest, this was probably one of the more challenging game shoes that I’ve worked on,” Kuerbis, who has 20 years of experience with the Swoosh and the Jumpman, said. “Flyknit was new and when you work in Flyknit, it’s not like if you make a change, you just go and cut out a new piece. You have to go talk to your programmer, and your poor programmer’s like, ‘I just spent two days programming this knit thing and you want to change the structure? That means a whole new program.’ By the end of it, we had over 300 programs for just this front part.

Kuerbis decided to transition the laces beneath the Flyknit to make the XXXII look as nice as possible. “We basically built all the support underneath, just to give it a clean, premium look,” he said. “The function and the performance is there, it’s just a little bit hidden.” 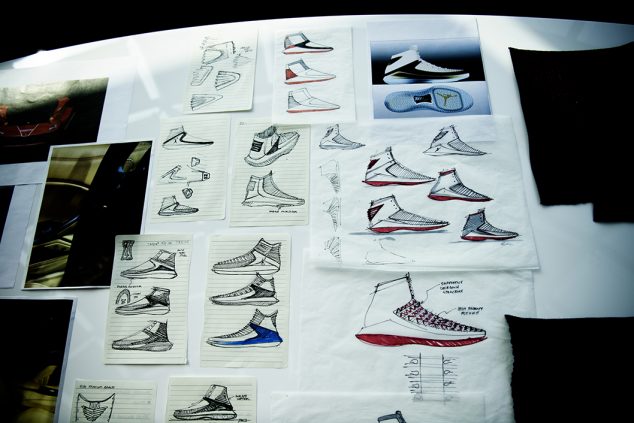 Because of Italy’s influence on both the II and the XXXII, Kuerbis accented the Knit with hits of leather on the collar.

“Having that rich leather shown on the inside popping out, this was really hard for the factory to do but we really pushed them,” he said. “We wanted to emphasize that this shoe has to feel like it’s hand stitched, handcrafted, it just comes out of the box beautiful.” Adding to the aesthetic even more is the return of the famed Wings logo, appearing on the XXXII’s tongue.

The sneaker’s rounded out by duel Zoom Air units in the forefoot and heel and a Flight Speed plate in the middle of the outsole. Creech said, obviously, that flight is always a part of every Jordan Brand sneaker, because MJ made a career out of dunking on any poor sucker that tried to meet him at the rim.

“We take flight from a design standpoint and really try to dimensionalize that,” Creech said.

“MJ’s still super competitive,” Kuerbis said, smiling. “Even though he’s not on the court anymore, this is still his baby. You still get that feeling from him, like he’s still playing. When we bring him the final shoe and he puts it on, and you see him wearing it, you get that it’s legitimized. Like, ‘Oh, that’s the game shoe.’”

Recapping the Jordan Brand Class of XXXII ‘Like Mike’ Invitational