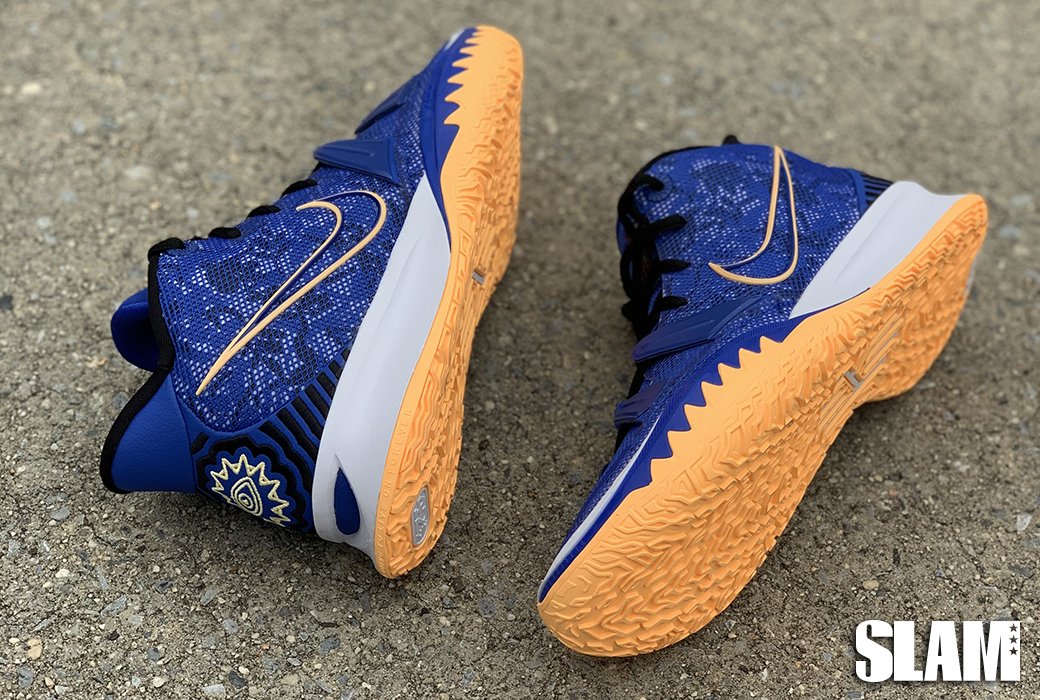 Intuition has been the foundation.

An innate feel has been guiding Kyrie Irving in his professional career, both on the 94×50 and within the context of his signature sneaker line. The natural creativity he expresses in both areas was forged in the fire a long time. He would go from layup drills to studying what made MJ’s sneakers and Penny’s marketing campaigns so different. And all those hours and hours built skill and a one-of-a-kind instinct, a reactionary ability that can’t be duplicated. The connection between the two spaces now drive each other. His game informs his sneaker in the same way that his sneaker supports his game.

The first six have been historically noteworthy. Basketball-informed real estate and construction have been mixed with imaginative colorways in a way that really hadn’t been seen before. Kyrie’s line isn’t about matching. He’s proven over and over that it’s about taking risks, seeing how colors compliment each other and how they play off each other. It was the line that served as a training ground for makeups that wouldn’t have been able to exist in the eras before him. Colors that the general public and execs at the League office would’ve laughed at in the past are now accepted widely.

With everything he’s already done behind him–the chip, the multiple All-Stars, the six sneakers–Kyrie had a clear vision for the 7.

“In the 7, start this whole new journey of being this high-performance basketball, taking on what Kobe’s identified with his line, I want to have some of that in my line as well,” Ben Nethongkome, lead designer of the 7, said of Irving’s mindset.

“When Eric Avar designed the Kobes, I don’t think they were thinking about it’s got to look cool off-court,” Nethongkome said. “That’s something we talked about internally. If it performs really well on the court, that’s the move that we’ve got to really pinpoint. If it doesn’t perform then we let the athlete down. We always prioritize the performance feature, the aspect of being a banger on-court.”

The 7 is dedicated to quickness and providing Irving with a vehicle for speed. Nethongkome and his team started the 7 by going back to the 6. They went through the outsole to begin cutting weight. Then they cut the strap that defined the 6, replacing it with forefoot TPU wings on either side of the silhouette. The 6’s leather got replaced by composite mesh with a reinforced layer below. Nethongkome and his team were able to shave 2.5 ounces from the 6 to the 7 when all was said and done.

But that forefoot Air Zoom Turbo unit that’s made his line so comfortable is back in the 7.

“The Zoom Turbo unit that we had before, that was something specifically that Kyrie wanted us to keep,” Nethongkome said.

The rest of the 7 will fall in line as the season gets going again. They’ve got some big plans to link up with Kevin Durant and Sue Bird.

“There’s for sure a conversation being had with our team and the KD team,” Nethongkome said. “We definitely are working on something with Sue Bird and Kyrie. And he’s definitely going to be rocking some of that for sure.”