Inside The LeBron 8 PS 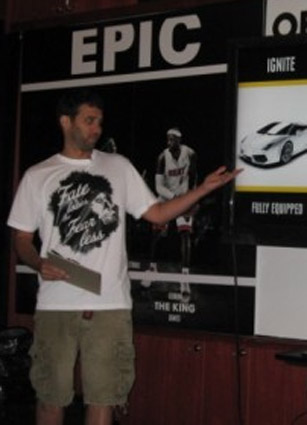 Growing up balling on busted up concrete courts and inside of small and stuffy gyms, this is the stuff you dream of. Sort of.

Running a discombobulated three-man weave on the floor at American Airlines Arena and finishing a reverse lay-in left-handed is one thing. To catch props from Kenny Anderson is another.

“Oh yeah. I see you,” Chibbs says as I finish the play and try and figure out who’s supposed to inbound the made basket on the second half of the weave. Later, in a half court four-on-four game, I stick a shot out of the corner (my favorite spot) and Anderson yells out what may be the worst Dirk Nowtizki comparison you’ll ever come across.

Throughout the duration of Friday afternoon, I kept waiting to sit up and realize I’d passed out on the couch and that for some reason Kenny Anderson had worked his way into my dream. It’s all real, though, which is obviously fantastic. The downside of course is that it all went too fast.

I was one of about 20 people that Nike invited into the AAA on Friday. The run on the Heat’s floor, with the arena Playoff-ready, covered in white seats and t-shirts for the impending Game 1 White Out, is the icing on the cake for an overall dope day. The reason we’re here is all about LeBron James and the newest incarnation of his signature shoe, the LeBron 8 PS.

Once we’re in at the arena, we’re led into a locker room. Turns out it’s the old Miami Sol room, which a Nike rep tells us is just used for miscellaneous things since the team split in 2002. Kinda sad, right? Anyway, the room is set up like it’s game time. There are chairs in a semi-circle around the room with black and white short sets, a backpack and a Nike box at the front. On top of the boxes are a pair of socks and even a pair of Nike’s Pro Combat shorts. They really had thought of everything.

Our pre-game talk was unique. Considering our reasons for being at the arena, Jason Petrie was the proper dude to address us. Petrie is the designer of the LeBron 8 and took us through the season-long evolution of LeBron’s sneaker. As you guys know, we started off with the LeBron 8 V1 and watched as LBJ switched it up after Christmas, going with the LeBron 8 V2, which got lighter (thanks to Flywire) but maintained the 360 Max Air unit on the sole of the shoe. (For detailed info, check here and here.) The LeBron 8 PS, Petrie says, caps a visual transformation of the shoe through the season that LeBron wanted to have happen.

He compares it to a couple of different things. A lion, he says, goes through three stages when it’s hunting.

“We started looking at the lion and its prey. How it feeds and how LeBron goes through the season and honed in on the notion of stalking and attacking. How (the lion) is stalking on the edge of the savanah, looking for something to eat and it spots its prey. Then he jets after it and sticks his claws in. There are three distinct moments in that chase, very similar to the chase for a championship,” Petrie says.

High end vehicles like the Lamborghini, he notes, do a similar thing. He breaks out a three-picture slide of the evolution of one of the exotic rides for a comparison.

“The idea of ignite, attack and finish come into play with these vehicles,” he says. “You can imagine at the start of the season, this is the model (the white car) they roll out: Fully equipped, with leather, nice paint, dope stereo, some heaveir rims, chrome. The car’s still peforming as fast as hell, right? Then you get here to this attack mode and the car looks different. The paint’s changed, drop top, a different profile, some more horsepower and different rims. It kind of becomes a different expression of what’s still there. You don’t lose sight of that.

“Then you get to this SV there in the corner and that’s built with no compromises. You’ve got the carbon fiber, you take the stereo out. You don’t go around with your buddies in this car. This one’s about beating the guy off the line. It’s a pretty cool notion. We relate sports cars to shoes all the time and that started clicking in our heads when we looked at transformation and the transformation that LeBron goes through in the course of a season.”

That’s where we’re at now, Petrie says. The LeBron 8 PS is the shoe that will help him as he zeroes in on the kill as we shift from April and into May and hopefully June.

In the process of dropping the shoe off 2.5 ounces from the V1 to the PS, Petrie says that Nike did so as a means of saving energy for LeBron.

“Now we’re at the point where we feel like the transformation is complete. In the end, we’ve taken almost 2.5 ounces out of the shoe, which is a pretty big deal,” he says, “and here’s why: Because at every ounce in a shoe, or in a uniform, that’s extra weight he has to carry around.

“Somebody like Lebron, an ounce in a shoe is about 55-60 pounds over the course of a mile and he runs about three miles in an average game, maybe a little less, maybe a little more. You start to talk about 2.5 ounces times 55 times three miles and that’s a lot of weight he now doesn’t have to carry around.

Petrie also noted that LeBron stopped the engineering and design team at the current weight of the shoe. “We probably could have gone a little lighter, but LeBron kind of stopped us. He said, ‘This feels great. I don’t want something that feels like a slipper as far as weight goes. I need something that I feel supported and that I feel comfortable in.’ So what we tried to do is get as light as we could while providing for those needs for LeBron,” he says.

Petrie then took questions from the room, which in itself would have been fun. How often do you get to throw whatever’s on your mind to the designer of one of the world’s most popular sneakers? I’ve got a transcript of that Q & A here as a separate post.

When the questions were done, the Nike folks threw a curveball at us. The boxes at our feet weren’t the PS 8s. First, Petrie says, they want us to wear the V2 to get a feel for what that’s like, so that we can appreciate the change of direction that the playoff sneak takes. We changed up and hit the court in our V2s. That’s where we were greeted by Anderson and a couple of other coaches.

I honestly felt like I was dreaming when I walked out of the tunnel and into the empty AAA. It was Friday afternoon and the seats were already set, covered in white with LeBron Witness t-shirts draped overtop of them. Whenever I’m at an NBA game I try to set foot on the court just for a minute but since I’m trying to do it inconspicuously I don’t make it much further than the baseline. I looked up and saw Tim Hardaway’s No. 10 and Alonzo Mourning’s No. 33 in the rafters. I thought about the number of greats who have stepped onto this court, thought of MJ and then of this year’s Heat team. Love them or hate them, from a basketball standpoint it’s fascinating to get to watch how it plays out and to watch LeBron and Dwyane Wade try and make this thing work.

Shortly after Anderson and his cohorts take us through some stretches, the fun begins. We start with a three-man weave, where each round of the weave is supposed to have less passes and more running. The problem here, though, was that not everyone played basketball as much as they follow it. We eventually made it through a few ugly looking pick-and-roll and rebound/outlet drills and the guys told us to head to the benches. Waiting for us there were the 8 PS.

While the weight change between the V2 and the PS isn’t drastic when you hold them in your hands, you can immediately tell that it’s a different type of shoe. As I noted in Friday night’s post, from a tech standpoint, the full-length Max Air unit is pulled back to a 180 in the heel. There’s Zoom Air in the forefoot and a carbon shank plate in the arch to add support. The shoe material swaps out Flywire for Hyperfuse and the superleggera is born. In the V2, you’re in the lux ride. In the PS, you’re ready to race. The on the court feel that the Zoom Air brings changes everything up, as does the Hyperfuse. Your foot feels more exposed, but not in a bad way. The thing that I’ve always loved about Zoom Air is that you feel like it puts your feet right onto the court. Hyperfuse almost does something similar to the top of your foot, allowing it to breathe and making the shoe itself lighter.

We broke into games with the PS on. SLAM HOF’er Russ Bengtson made my team pay for defensive miscommunications, scoring a handful of layups in the first game. I don’t think I scored a bucket until the second game and I didn’t score too many after that. I’ll blame the shortness of my J on a lengthy travel route to Miami and about 3 hours of airplane sleep.

We played a timed quarter of a full-court game and then it was time to wrap things up. After my team lost by a bucket, we found out what we had been playing for. Omar, a Heat employee who gave us a quick tour of the building earlier in the day, walked out onto the court holding the Larry O’Brien trophy. Like I said to my teammates, had I known we were playing for the LO’B, I would have worked a lot harder. We took a group pic with the trophy and a few of us took some individual shots with it. By then, Chris Bosh had made his way onto the court and was getting some shots up (which paid off on Saturday, evidently).

Overall, the weekend went way too fast but was 1 million percent unforgettable. We took in Saturday’s game from a suite at the AAA with Nike, watched the Heat tough out a win against the ‘Sixers and on a personal note, I was able to wear shorts and white sneakers for the first time since October…or maybe September. Anything that would have happened on top of that was a win for me.