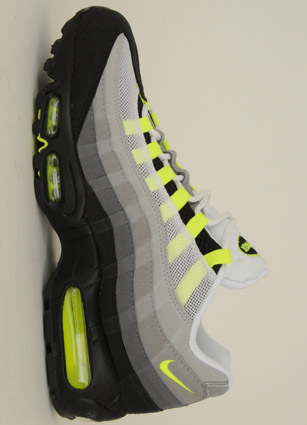 It’s tempting to just show the shoe up close and leave out the words altogether. A picture is worth a thousand words, right? Does the Eiffel Tower need a summary? Mt. Kilimanjaro?

Over the top? Who cares? The mission here is not to nudge you in any way. If you want to be enticed, please turn to the back of this magazine and you’ll find plenty of shoes. In this, the Hall of Fame, the aim is to celebrate greatness, which is what the Nike Air Max 95 represents.

The Air Max 95 was such a marvel of athletic ingenuity and artistry that sneaker fans were left astounded. The shoe didn’t fill a space as much as it generated a brand-new one. Though running shoes created the sneaker industry, they had been surpassed stylistically by basketball and cross-training footwear. The early to mid-’90s were a golden age for designers, with many great shoes being created during this era. Seemingly all the creative brainpower was put into performance shoes, and even though the Air Max line had been out since the late ’80s, its success was subdued. The 95 changed all of that.

In the hands of designer Tinker Hatfield, the shoe became a revelation, an exciting running shoe with tons of creativity embedded in both the function and physical characteristics. It was an aesthetic never seen in a pair of running shoes, and its relevance 15 years later is a testament to its futuristic design. The continued popularity of the Air Max 95 is due to the fact that it’s a sneaker functioning as a conduit. It’s the bridge that connects everybody. It’s your favorite sneaker’s favorite sneaker.

From this vantage point, the 95’s magnetism is based on three categories. First, it’s chock full of technology. It’s the first running shoe to have Max cushioning in the heel and forefoot, and the first shoe period to have different levels of cushioning in the same shoe. At the time this was groundbreaking, and even as technology has improved, it remains one of the all-time most comfortable sneakers. It’s equipped with a graduated suede upper for stability, reflective materials on both the front and the back to assist runners with late-night identification, a easily moveable nylon mesh toe box for flexing your toes, large eyelets made for easy shoe tying and a molded tongue to help maintain a snug fit.

Second, even with all that tech, it has a minimalist feel. Instead of pronouncing itself to the world, the Swoosh is small and pushed back near the opening. It has a quiet confidence, relying on the creation itself and not the name. It’s one of the few kicks that works in disparate temperatures. It’s sturdy enough to wear in snow and ice but cozy enough to rock in the summertime. It also comes in a bunch of really nice colorways, starting with a gorgeous grey and neon and expanding into several dozen others. You ponder it, there’s a color for it.

Lastly, its appeal knows no boundaries. It somehow evokes a level of style and sophistication while remaining true to its initial athletic potential. It’s a complex creation, yet for 15 years it has functioned as an everyman shoe, and for that matter, everywoman. Air Max sneakers as a rule tend to appeal to both genders, but it’s even more so with these. A woman—and excuse the infinitesimal objectification present here—in a pair of 95s comes off looking tremendously cute. Difference-making cute. Go anywhere—the post office, parties, work, Whole Foods, wherever—you will see Air Max 95s. It remains the best sneaker option for those who want a little more edge than the plain canvas look and for those who’d like to tone down the aggressiveness of the hyper-athletic look of most basketball kicks. The whole trend of wearing sneakers as a casual choice stems from the 95’s ability to bring disparate ideas together. To this day, age, race, class—all are diminished in light of the 95. You can wear them with jeans (shorts, too) but you can rock them with a jacket as well. They’re a sneakerhead favorite, a standard amongst hip-hop heads, popular on college campuses, and worn by working women when they switch out of their heels.

It can be argued that the Air Max 95 is the most worthy choice ever for the KICKS Hall of Fame, but that’s beside the point. I’m just glad it’s finally in.