We sat with Jordan Brand president Larry Miller to talk about the Jabari Parker signing. 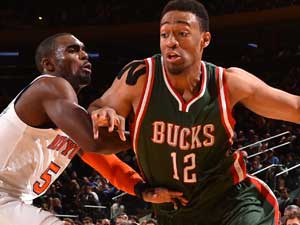 The Jordan Brand roster is stacked full of athletes that possess the athleticism, charisma, character and thirst to succeed that embodies the namesake.

With all the other-worldly skills of those athletes, there was previously no connection to the city that will always know Jordan as its own: Chicago.

That all changed on June 26, just hours before the NBA Draft, when Jordan Brand announced the signing of Jabari Parker, who would go on to be selected by the Milwaukee Bucks, a team just 90 minutes down the road from his hometown of Chicago.

Along with his on-court pedigree—Parker was a four-time state champion at Simeon, two-time Mr. Basketball of Illinois, and averaged 19.1 points, 8.7 rebounds while shooting 47.3 percent from the field in his one lone season at Duke—Parker brings a humble and selfless personality the Jordan Brand has had on its radar for quite some time.

Even with his quiet demeanor, Parker has the attitude and hunger to be one of the game’s next household names.

“It’s been a lot of second-pick busts and I’m just trying not to be that [next] bust,” Parker said. “So everyday that I step on the court, just remind myself that I have a long way to go. I want to be one of those guys on the front tier in the NBA, like LeBron, KD and Blake. I just have to have that mentality from the [start].”

The folks at Jordan Brand have also kept a vested eye on the violence amongst the youth of Chicago. Jordan Brand President Larry Miller said Parker’s signing comes at a good time because he can give insight as Jordan plans to find ways to get involved, address the issues and help be part of a solution. Parker would no doubt be one of the central figures if any Jordan strategy towards a solution in his hometown comes to fruition.

SLAM caught up with Miller recently to discuss what made Parker such a good fit for Jordan.

SLAM: What were some of the things you guys saw in Jabari that made you want him representing the brand?

Larry Miller: It’s what he was able to do on the basketball court. We know he has great basketball skills and has the talent to be able to be a great player in the NBA. But also, we like to look at who a player is off the court. Jabari clearly fits what we’re looking for, in terms of his character, his family life, his connection to his community. All of those things kind of came together, and Jabari is what we feel is a perfect fit for the Jordan Brand. And it just so happens that he’s from Chicago, which is a focus for us. It really kind of came together.

He got a chance to meet with Michael, and he was instantly, “This is a kid that should be a part of us.” When we sat down and talked about the (NBA) Draft and what players were coming into the Draft, Jabari was at the top of all of our lists, including Michael’s.

SLAM: What’s that brainstorming process like, in scouting what players you’re going to go after?

LM: We sit, talk about it and look at all the players—again, who they are on the court, but who they are off the court. MJ was really excited about Jabari from the beginning, and he was like, “That’s who we have to go after.” And we all agreed.

SLAM: With that process, you get a feel for the player and a bit of an understanding of their makeup. Did meeting with Jabari in Portland do anything to further strengthen all of your beliefs in who you were getting to represent the brand?

LM: It did. He and his family came to Portland to meet with us, and we were all just blown away. Not just by him, but his family and how they work together and support each other. We had an idea of who he was. When he came out and spent time with us, it just confirmed for us who we thought he was.

SLAM: It’s still early and there’s a lot of basketball to be played, but is there any sort of strategy with him as far as playing in Milwaukee, but having the Chicago connection and wanting to remain visible here?

LM: We’re going to let him develop and play his game. We’ll be there to support him, provide him with the best product we can possibly provide him with and just let his game evolve. We don’t want to put pressure on him. We want him to not feel like he’s pressured to do a whole bunch. Go out there and play and do what you need to do on the basketball court, and let us take care of the rest.