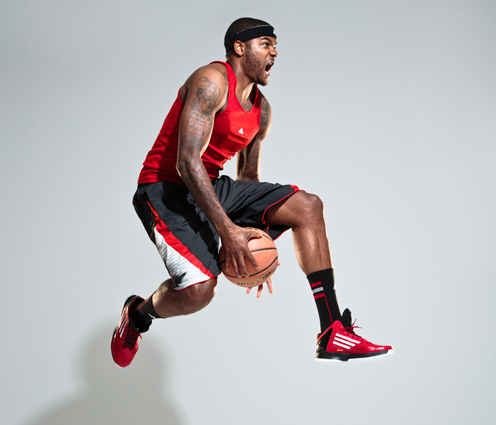 When Atlanta Hawks forward Josh Smith reflects on his home court, Philips Arena, his feelings are understandably mixed. The A-Town native loves it when a packed house goes bonkers after he throws down one of his monster jams; he just hates it when that same packed house of fickle fans erupts just as loudly for Blake Griffin or Dwyane Wade.

“This year we were rated the worst sports town in all the United States,” Smith says. “I feel like we do deserve a little gratification from the fans. We’ve been good for five, six years now. I know it’s probably hard because of the recession to be able to get good seats, but you know, people inspire me in the nosebleeds. I just want to see you in the stands.”

Philips is pretty quiet again today, but it’s late June and the Hawks’ season is long over, so it makes sense. Adidas is in the building though, taping a commercial for the adizero Ghost 2, a shoe Smith will proudly be the face of this coming season. Inside the arena is a film crew, some extras in the seats and a couple of Indiana Pacers imposters on the floor. Nobody really to cheer for a block or jeer at a questionable 18-footer.

Thankfully, Josh’s relationship with adidas is rosier than his one with Atlanta. No love-kinda hate squabbles there. Just a good ol’ fashioned family. “Everybody’s cool, easy to get along with [at adidas],” Smith, who’s been with Three Stripes since ’04, insists. “Whenever I need any kind of product, it’s not a hassle. If I need anything for my family, they do the same. I’m just blessed to be in a situation where I’m comfortable, because I’m the type of person who works on trust.”

The bond blossomed in ’09-10, when JSmoove began endorsing his own shoe, the adizero Infiltrate. The brand re-connected with Josh for the adizero Ghost campaign last season. Its sleek, simple, spoken-word commercial is still one of last year’s most underrated. But if you think that promo was memorable, just wait until you see what the creative minds have in store for the Ghost 2 ads.

As for the shoe itself, it’s a closed-mesh, Sprintweb-enhanced sequel to the popular Ghost, one of the lightest shoes in the NBA. But in keeping with the airy feel, designers didn’t compromise things like traction or durability. That’s great news for Smith because, if he’s to keep Philips rockin’ this coming season, he’s going to need a shoe that’s as versatile as his game.

“I [look for] light, comfort and definitely style,” says Smoove. “You don’t want to go out there with something that’s not stylish. Style is so important these days, especially to the young population. They’re influenced by how a shoe looks because you know people will start wearing shoes with their jeans. [The Ghost 2] definitely has the style that it needs in order to grab the eye of a consumer.”

There Josh goes, considering his Atlanta fans’ feelings again. Now, if only Philips Arena would start consistently returning the love.