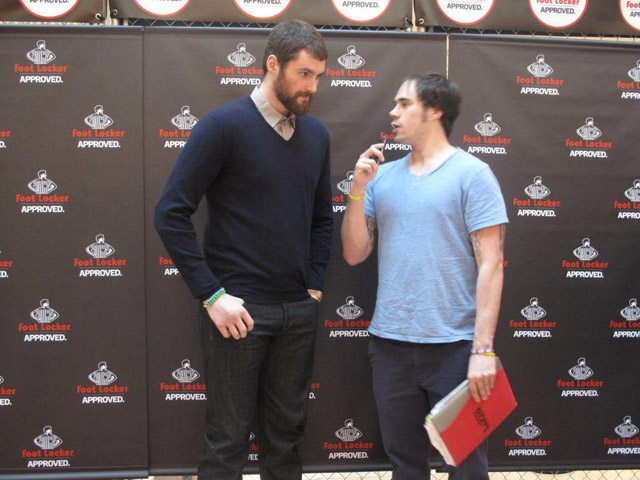 When you think of NBA players with major sneaker deals, Kevin Love isn’t necessarily the first guy that you think of. Everyone knows what sick numbers Kevin puts up with, but his efficient style of play isn’t exactly what sells kicks. Well, at least it wasn’t seen that way in the past. The Timberwolves star inked a lucrative multi-million dollar with 361 degrees, a Chinese sportswear company. Love is changing the game by social norms, not letting the stereotypes of selling kicks change him, and it’s working.

At the Foot Locker Approved space in Galleria Mall, where Kevin posed for pictures with all sorts of happy fans, we rapped with him about his fondest Foot Locker memories, tips for young shooters out there, and when he’s going to be back on the hardwood.

SLAM: What was your fondest Foot Locker memory?  You know, what was that shoe you stood in line all night for?

Kevin Love: Well, the easy thing to say was waiting for Jordans. However, I was also really into the Answers and Pippens. I was into Barkleys too, as well as a lot of other players’ shoes. I went in there and got a lot of apparel too because I was always a big Nike guy growing up in Portland, Oregon, but I also liked adidas. Foot Locker was always the easiest place that I could go in and find the newest gear.

SLAM: You did work in the Foot Locker Three-Point Contest last year, taking home the crown. How much is it killing you not being able to defend it this year?

KL: It’s tough. I want to go out there and compete, but I also wanted to go out there and be in the game on Sunday. It’s been an injury plagued season so all I can do is come back as healthy as possible, then take everything else from there. Hopefully I’ll be here playing on Sunday for a number of years.

SLAM: I’ve watched you since your early high school days and have seen the way that you’ve evolved your jumper to the point that you’ve been a 40% 3-point shooter. Any tips for shooters out there?

KL: Keep continuing to work on your touch and work on every single shot. Being able to transition to the NBA 3-point shot wasn’t too tough for me from college because I was shooting out there a lot at UCLA and before the Draft. Progressively, it got better over the years. I’d just say to start inside, work on your touch, and continue to move it out.

SLAM: You’re a guy who played for AAU teams and in All-Star games for Nike and Reebok, then went to an adidas college. What was the process like choosing which shoe company to sign with once you hit the League?

KL: It was incredibly tough.  For a big man, it’s always tough to decide what sneaker brand to go with. I wanted something that was going to set up myself and my family financially, but something that was also going to be durable and I could wear out there on the court. I spent my first couple of years wearing Nike’s and transitioned to 361 Degrees. It was a different and an unorthodox feel for me, but I’m still producing results out there on the court.

SLAM: To wrap things up, what’s the latest with you health wise? How are you feeling?

KL: I feel great. I just want to get my hand better and I think that it will probably be ready in 4-6 weeks. I’m hoping that it’s closer to four, so we’ll go from there. I don’t know when I’m going to be practicing as opposed to playing, but I’m just trying to get back out there.