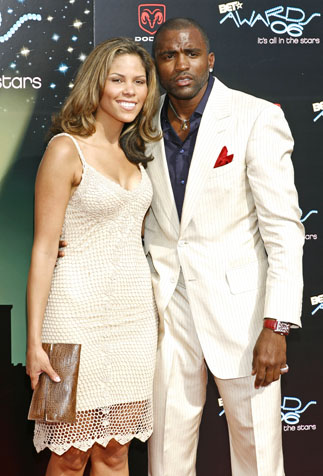 QUOTES OF THE DAY
“That’s why Ben [Wallace is] ‘The Body.’ He has very low body fat. He’s ripped. He’s worked on his body incessantly. You feel him when you go near him.” — Scott Skiles, with a little TMI.

“We played the throw-the-ball-in-to-Pau-[Gasol]-and-get-out-of-the-way offense. Really, that was the offense.” — Lorenzen Wright, on playing for the Grizzlies.

“I’m suing him for ruining my modeling career.” — Sean May, after Gerald Wallace landed on his head, opening a wound.

“This is a reoccurring issue with Yao’s feet, and he’s not getting the shoe on time from Reebok. He is not getting the shoe fitted properly so he doesn’t have reoccurring issues with his toe and feet. Yao’s got to be more demanding of this company. He’s not getting the results he wants. It puts him at risk. It’s the same issue here this year. Nothing’s changed. It’s problematic. Some things can’t be prevented. This one I think can be with more attention to detail on the shoe he’s getting from the company that really should care about him.” — Jeff Van Gundy. putting Reebok on blast.

“I really understand what I’m here for. And I’ll let you know in about 40 games just what that is.” — Brian Scalabrine, on understanding his role with the Celtics.

THE LINKS…
• Isiah broke Knicks camp early, but only after the team barely made 10 consecutive free throws. Also, after Spike Lee showed the team a screening of his own movie about New Orleans, he broke down in tears. At the movie or at the Knicks?

• The Cavs are attempting to go completely ticketless, using a system that owner Dan Gilbert developed called “Flash Seats” that involves checking IDs and credit cards. Funny, before they had LeBron they went completely ticketless for a few years there. (Ba-dum!) Sounds like an interesting idea. This could cut down on ticket scalping, but it could also cause a massive rise in pickpocketing.

• Jeff Van Gundy is beefing with Reebok over Yao Ming.

• Uh-oh: Saer Sene is learning English by listening to Rick Ross. Couldn’t he listen to someone who speaks English?

• Dwight says he’s the leader of the Magic. Can we call him The Illusionist?

• Lots of head injuries early on in training camp: Jameer Nelson is out with concussion symptoms ….. Sean May received 8 stitches after Gerald Wallace landed on his head ….. Zaza Pachulia is still recovering from a blow to the head (low here) ….. TJ Ford got a welt over his eye after an elbow from Freddy Jones …..

• Mikki Moore is comparing himself to Kenyon Martin. Must be battling a snakebite.

• Wait, is T-Wolves owner Glen Taylor calling KG a liar? Or is he calling me a liar?

• Sixers rookie Steven Smith overslept and missed a team outing to the top of a mountain in Barcelona. He also missed other rookies singing “Lean On Me.”

• Doc Rivers took the Celts to an advance screening of The Departed. It really bothers me that Wally Szczerbiak has seen that movie while I haven’t.