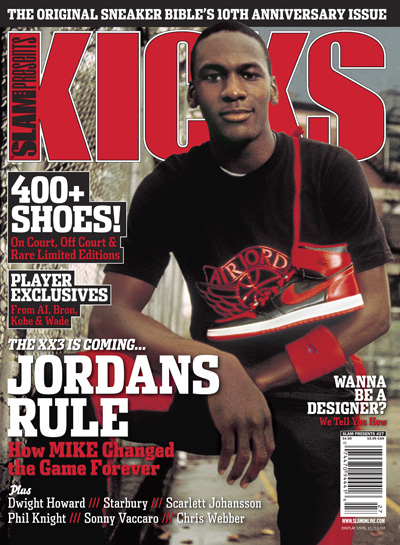 Sneaker Pimp: While I was never naive enough to think that wearing the same shoes as my favorite players would make me play like them, the younger me definitely thought wearing such shoes would make me cooler. This is why I could be found in Brooks high-tops one year (channeling Nique) and Spot-Bilts the next (in honor of the X-Man). Needless to say, I also rocked Jordans whenever I could afford them. After all, there was no player cooler than Mike.

Gradually, through the years, Air Jordans became almost solely about fashion; as Mike got older, retired and re-retired, the basketball skills which he’d used to originally make his shoe popular obviously became increasingly irrelevant. Which is fine. After all, save for the occasional off year, most year’s Jordans have been fly enough to warrant fashion-only consideration. Or, in the case of the devotees that Chris O’Leary explores on page 62, fly enough to sleep on the street for. But let’s not forget where all this passion originated.

With KICKS turning 10 years old and the Air Jordan about to turn 23 (!), we thought the time was right to honor the man and the era that, frankly, without which a magazine such as this couldn’t even exist. Turning Russ loose to teach (or re-teach, for our 30-plus readers) the history of how the Air Jordan took off was a no-brainer.

Jordan lesson aside, we’re hardly stuck in the past. Check the rest of our pages for a nice mix of shoe-related features and more new kicks than we can count. And don’t be afraid to buy a pair just cause a dope player wears them. It’s always worked for me.