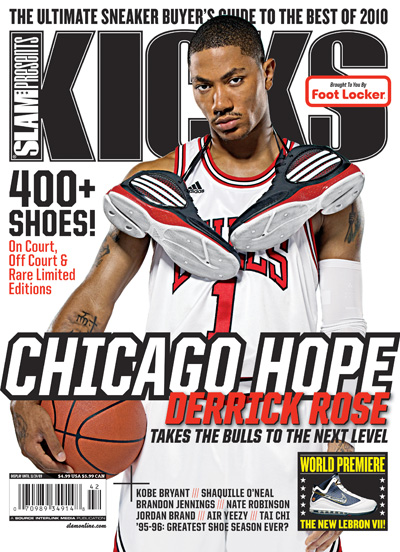 Sneaker Pimp: In today’s sports media and pop culture world, where the back stories of most young stars are sold, told and repackaged before the subjects have even accomplished much of anything, I am amazed at how far under the radar Derrick Rose remains. Here’s a young man, raised on the South Side of Chicago, who stayed out of trouble with the help of three older brothers, attended a true public high school, and then, after biding his time for one successful college season, got drafted by his hometown team, a storied franchise that desperately needed some new energy and had to overcome long Lottery odds to even earn the right to pick him.

It wasn’t just that Derrick Rose was suddenly a Bull, but that he played so well. Dude averaged 17 points and 6 assists per game while showing off the most unstoppable dribble penetration this side of Chris Paul. He won the Skills Challenge during All-Star Weekend and won the Rookie of the Year award handily, all while leading the Bulls back to the Playoffs. I mean, this is storybook stuff.

And yet…Derrick Rose is still far from a household name. What gives? Well, for one thing, as our man Russ Bengtson details in his cover story (pg. 40), “Pooh” is not the most loquacious fellow. For another, Derrick’s shoe company (often a player’s greatest source of promotional might), adidas, tends to eschew signature kicks in favor of similar, themed lines of shoes (like the TS Lightning Creator above), the better to play up their Brotherhood campaign. The sort of “no man is bigger than the team” ethos adidas pushes is a logical fit for the point guard with the unobtrusive personality, but that doesn’t mean we can’t share our view that Derrick Rose will be an individual star in the NBA for a long time.