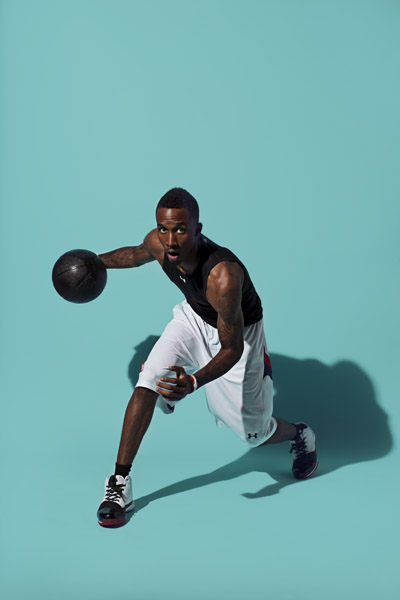 Thirteen years in, you should know the deal: KICKS is the sneaker bible.

Getting on the cover of KICKS is much harder than getting on the cover of a SLAM. Frequency is one reason: SLAM now leads KICKS 141-13 in terms of opportunities. The other is that you can’t just be a dope, compelling ballplayer, or just have dope, compelling shoes. You need both. A good shoe “story” (as folks in the industry like to say) helps too.

Well, Brandon Jennings has got all three. You should know the background by now. In sum: turned pro out of high school, signed to Under Armour as the brand began its slow entry to the basketball market, played a year in Italy, got hated on by NBA GMs and media in the lead-up to the ’09 Draft, got taken 10th by the Bucks, dropped 55 points in his seventh NBA game, appeared on the cover of SLAM #135, led the formerly dead deer to a deciding Playoff game and the franchise’s most exciting season in years, finished (an unjust IMO) third in the Rookie of the Year voting and liveblogged this year’s Draft for us. Whew.

So what’s new? The shoes are actually coming out. Much as Brandon is on the verge of turning the potential we’ve seen since he was 15 into being a top-tier NBA PG night in and night out, Under Armour is on the verge of bringing their long-awaited product to stores.

A four-shoe line of shoes, including Brandon’s signature “Black Ice” kicks, will be on sale in November. This issue will be on newsstands this week. Besides the lengthy Brandon cover story by yours truly, there is great stuff on all the brands making noise today: adidas, AND 1, APL, Converse, Dada, Fila, Jordan Brand, Li-Ning, Nike, Reebok and more.

In the next couple of weeks, we’ll be posting more photos and videos from the cover shoot, but if you want the full Brandon Jennings/Under Armour story, as well as other great photos and writing and hundreds of hot kicks for the fall, all in one place, buy the issue!

P.S.-Two corrections on behalf of our friends at Foot Locker who helped make this issue possible. The Jordan shoe shown on pg. 82 is obviously the IX, not the XIII. And the highly awaited Nike Foamposites that are advertised on the Foot Locker poster as going on sale September 4 will actually be on sale September 3. I think the rest of the issue, from art to edit to ads, is extremely on point. Enjoy!