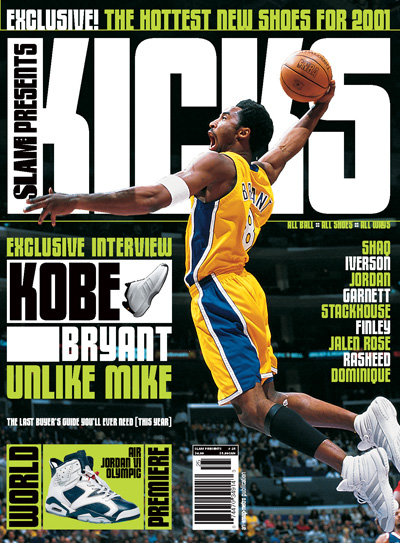 Sneaker Pimps: As I signed the confidentiality agreement-which I believe gave the Fun Police permission to shoot me on sight if I revealed any information concerning what I was about to see-it struck me that this whole shoe thing was getting kind of serious. This was in the lobby of the Vintage Plaza Hotel in lovely downtown Portland, where representatives from a certain large shoe company were going to take myself and a few select members of the national and international press on a top-secret tour to view some new, uh, things that would change the, um, something.

Like I said, I’m bound to secrecy. We all swore on the name of Moses Malone. But this news-whatever it may be-is big. And with retro styles hitting the market like a 10-ton truck (pg. 11) and dead-stock Jordan I’s fetching up to $1,000 on eBay and Vintage USA, it doesn’t take a rocket scientist to figure that the b-ball market is gonna twist upwards again. Timbs and trail runners aren’t going away, but with new stuff like the smooth Steve Francis joints (pg. 111), the insectile Kobes (pg. 116) and, um, whatever those nice gentlemen in Beaverton won’t let me talk about yet, heads might start lining up for ball shoes again. And this doesn’t even mention the Jordan XVIs, which are so far off the hook they don’t even remember where the hook is. (I can’t show these either-it’s all timing-but check http://pub4.ezboard.com/bniketalk for the crazy top-secret stuff.)

The beauty is that old tech and new tech are coming together. Reebok re-issues the Pump (pg. 12) at the same time they bring DMX to the next level. Nike hooks Rasheed with his own version of the Air Force I (pg. 100), while simultaneously hitting GP off with a new shoe (pg. 101) with more technology than a Stealth Bomber full of DreamCasts. If there was ever a time to be addicted to sneakers, this is it.

Of course, none of that explains this photo of MJ in the ’87 All-Star Game. You want to know why? Sorry, that’s confidential.