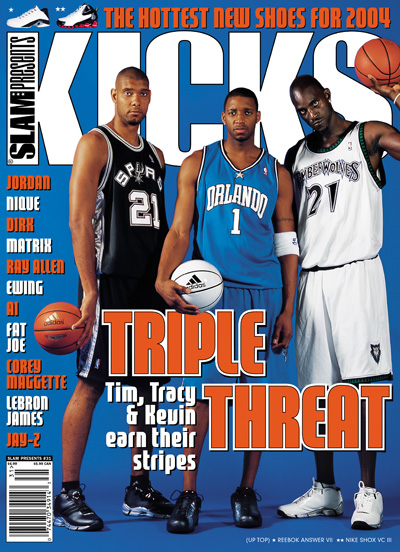 Sneaker Pimp: Let it be known, before I get into all this, that I love retro shoes. Love ’em. The fact that I can walk into a store right now and buy a fresh pair of adidas Top Tens or Nike Dunks or Diadora B. Elites is unbelievable. But—blasphemous and hypocritical as it may be—I think everyone needs to take a step back from the retros for a little while. Let’s all join the rest of the world in 2003.

Why, you ask? This is why: We’re quickly becoming a recycled culture. Sampled music, remade movies, retro jerseys. Has originality just fallen over dead? Has nothing cool been created since the ’80s? I feel like standing on a rooftop, like Bobbito (page 29) in that NBA Street ad, and screaming to the people: “Open your eyes!”

I’m not saying everyone should go as high-tech as humanly possible. We all don’t need to go back to the future like Marty McFly. (You do remember those regrettable “turn ahead the clock” baseball jerseys, right?) There’s no need to throw back all the throwbacks. But still, let’s put those white/white Air Force 1s down for a minute and walk-don’t run-to where the new basketball shoes are. Let’s spend a minute over there, looking at them. Consider-that’s the retro stuff of tomorrow; the shoes that should define this generation. The Air Force 1 (and the others from the early ’80s) are someone else’s memories. I know the white on whites were in the Nelly video (page 114) and all, but come on. Let’s try something new.

Want another reason? Look at the cover. That’s 3/5 of the All-NBA First Team right there. Think they’re playing in Air Force 1s? Nah-those were for dudes like Jamaal Wilkes and Bobby Jones. Guys who retired when our cover subjects were in grade school. OK, so they wear three stripes. Well, the adidas Top Tens are dope, but can you name one of the Top Ten NBA guys they were named after?* Probably not. Those three guys on the cover aren’t re-living history, they’re making it. Don’t miss out.