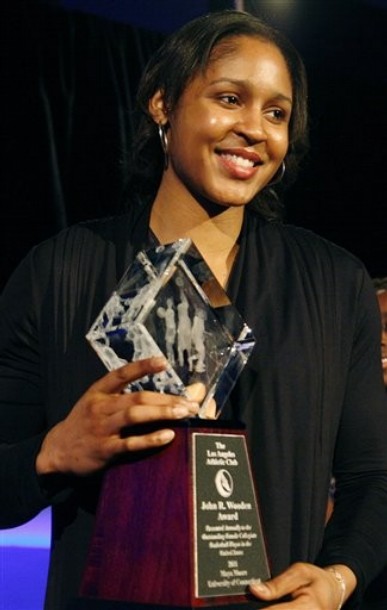 
Maya Moore isn’t that much different from any other fresh-out-the-collegiate-box graduate. After kicking a lot of ass in college, she landed the job she’s best suited for. Then she signed an endorsement deal with Jordan Brand, becoming the brand’s first female basketball signee.

The first overall pick in the 2011 WNBA draft, Moore was the face of UConn demolishing teams for basically all of her four years at the school. The Huskies won back-to-back titles in 2009 and 2010, went 150-4 over four years and put together an NCAA record 90-game win streak. She was a two-time national player of the year, a three-time academic All-American and four-time All-American on the court. She was then grabbed by the Minnesota Lynx in the WNBA draft.

The move makes sense for JB, who has bumped up its production of women’s shoes in recent years. Whether Moore rocks the Jordan 2011, retro Jordans or hits the court in women’s versions of MJ’s shoes, having an on-court game changer in the most popular basketball sneaker in the world is a good move for the brand.

The WNBA pre-season gets underway tomorrow.

The press release from JB is below, via CK:

BEAVERTON, Ore.–Today, Jordan Brand, a division of NIKE, Inc. (NYSE:NKE), announced the signing of Maya Moore, two-time NCAA Women’s Basketball National Champion and college basketball’s all-time leader in games won as a player. One of the most decorated athletes in the history of collegiate sports, Moore becomes the first female basketball player to join the Jordan Brand.

“Not only has Maya proven to be a prolific winner on the court, but her hunger and determination to make an impact off the court makes her a valuable addition to the Jordan family. We look forward to working with Maya as she carries her success to the next level.”

Recognized as one of the greatest collegiate women’s basketball players to ever play, Moore led the University of Connecticut Huskies to back-to-back NCAA titles in 2009 and 2010. During her tenure at UCONN, she re-wrote college basketball’s record books by leading the Huskies to a 150-4 record, including an NCAA Division I basketball record 90-game win streak.

“I am thrilled to welcome Maya Moore into the Jordan Brand,” said Michael Jordan. “Not only has Maya proven to be a prolific winner on the court, but her hunger and determination to make an impact off the court makes her a valuable addition to the Jordan family. We look forward to working with Maya as she carries her success to the next level.”

“As a student of the game, it is a dream come true to align myself with a brand that has a rich history in sports,” said Maya Moore. “Like most kids, I grew up idolizing Michael Jordan and continue to work relentlessly to reach his iconic status on the court. I’m truly motivated to take my career to the next level as a member of Team Jordan.”