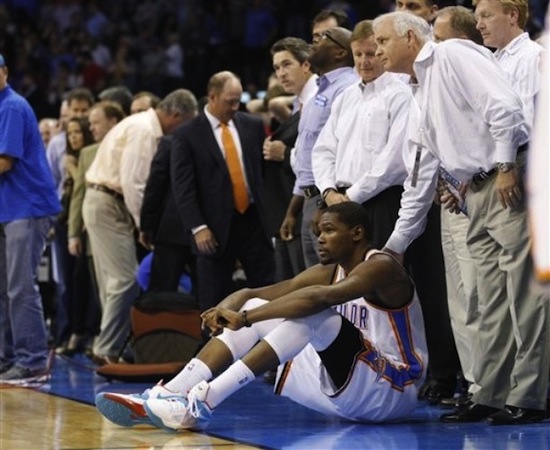 If you watched the Thunder-Clips game last night, you saw Oklahoma City lose a crusher despite late theatrics from Kevin Durant. You may have also noticed a striking new pair of sneakers on Durant’s feet. Last night, the All-Star forward debuted the new Nike N7 Zoom KD IV. In fact, KD even tweeted about the sneakers before lacing them up for the game:

Came up with something Special with @NikeN7 for Tonight’s Game. “Everybody Leaves a Footprint”

N7 is “a community program and fund dedicated to providing access to sport and physical activity for Native American and Aboriginal communities with a focus on youth.” Playing in OKC has made Kevin more active with the cause, and Nike wanted to commemorate the program in a fresh manner—the result was the N7 model of the KD IV. N7’s tagline is “Everybody Leaves a Footprint,” as in the way each of us affects future generations.

The N7 colorway will be available in both white and black later this spring and early summer at Nikestore.com and select Nike retail locations. It’s the first of the Summer 2012 Nike N7 collection, and it features turquoise touches to depict the symbolic color of friendship and community in Native American culture.

A portion of all profits from sales of the shoe will benefit  the N7 Fund, benefitting grassroots sports and fitness programs for Native American youth. Learn more at niken7.com.