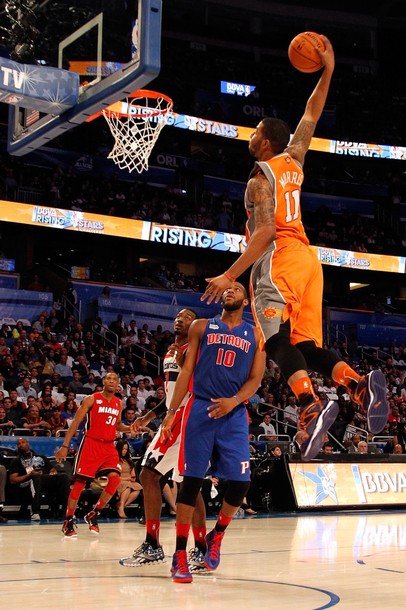 AND 1 has announced the signing of NBA rookies and twin brothers Marcus and Markieff Morris to 3-year endorsement deals. After starring together at Kansas, the Morris twins were selected with back-to-back picks in the 2011 NBA Draft—Markieff by the Phoenix Suns at No. 13 and Marcus next to the Houston Rockets.

They are only the third set of twins selected in the first round since the modern NBA Draft era began in 1966. So far this season, Markieff is averaging 7.2 ppg and 4.4 rpg for the Suns and has started 5 games, while Marcus scored a career-high 8 points last Thursday in a Rockets win over Golden State. More details from our friends at AND 1:

“The Morris twins are great young talent and embody everything we love about the AND 1 brand,” said Robert Purvy, AND 1 Brand President. “Markieff and Marcus bring it. With their hometown work ethic, hunger, and true passion for the game, we’re proud to have them play a big part in the future of AND 1.”

“We’ve been fans of AND 1 as long as we can remember. We grew up on the MixTape, and to now be a part of the AND 1 family is really an honor,” said Marcus Morris.

“For two guys from Philly, there’s really no other brand we’d want to represent. We’re excited to work together and promote the game we love,” said Markieff Morris.

Born and raised in Philadelphia – which is also the original home of AND 1 – they led their high school basketball team to back-to-back PIAA Class AA titles in 2006 and 2007. The 2006 title was the first time a Public League school won the state championship.