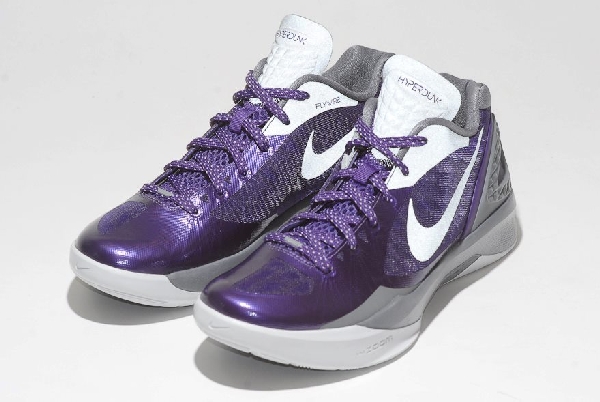 Images and info via Counterkicks

The Nike Zoom Hyperdunk 2011 has been one of the most popular silhouettes on NBA hardwood this year. Both big men like Blake Griffin and smaller players like rookie Kyrie Irving seem to appreciate the next generation Flywire and Zoom Air setup. As we guide into 2012 now, we might see the Hyperdunk 2011 Low start to show up more frequently as the winter season wears off.

Upon first glance, the low version looks exactly like its big brother minus the higher collar cut. It features an external TPU heel counter, carbon midfoot shank, synthetic Flywire construction, and a Phylon midsole with a herringbone-patterned rubber outsole underneath.

A second inspection however reveals a few differences from the standard height model. At the forefoot, the low version features an additional overlay. Underfoot at the heel, what previously showed a transparent plastic film with “NIKE ZOOM” inscribed on it allowing view of the Zoom cushioning unit has been replaced with opaque colored plastic and just the Swoosh logo. On these particular purple and orange Hyperdunk 2011 Low styles, both the tongue and swoosh are reflective, as seen in the images.