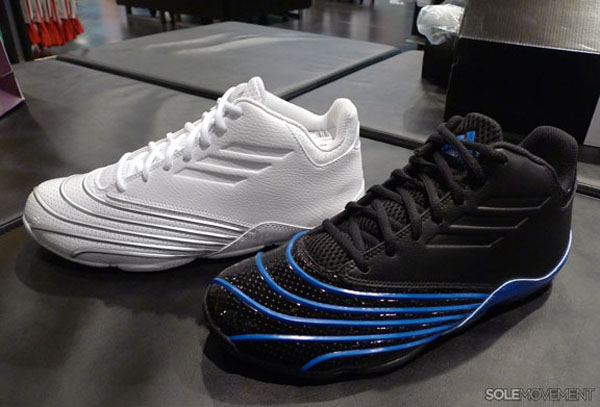 
adidas has given us a look at what we can expect from them in the coming basketball season (or whenever the lockout allows the next season to get here).

Should the NBA’s players and owners be able to sit in the sandbox together in time to avoid a work stoppage in the fall, Derrick Rose and Dwight Howard will rock signature sneaks. Rose will get the MVP treatment from adidas and will follow a game plan similar to this season, which saw him wear a fall shoe, then change it up for All-Star and wear a modified version of his signature in the second half of the season. His adiZero Rose 2 will come in a high and a low cut that will be in stores throughout 2011-2012.

“adiZero Rose 2 centers on a “Flight” storyline, best exemplified by its sockliner graphic which mimics destinations on an airport monitor with NBA city names like Los Angeles, Boston, and New York, all reading “CANCELLED”. The only city highlighted is Chicago, which reads “CLEARED FOR FLIGHT”. In effect, Rose let people know he could be MVP this last season, and he’s raising the stakes for the next run making his competition aware in advance that their plans, their flights, their aspirations to win against Rose are all being cancelled.”

The second half of the season will see Rose in the lighter Dominate, which CK breaks down:

“adidas adiZero Rose Dominate continues the Rose 2 “Flight” story, shaving off 2 ounces from Derrick’s first half shoe for a lighter run into the post season. The Rose Dominate is built on a similar performance platform as the adiZero Crazy Light and incorporates the first usage of adidas miCoach into the three stripes basketball footwear lineup. Look for the adiZero Rose Dominate to begin impacting at retail in February 2012, with new styles releasing through Spring and another Bulls run for an NBA championship.“

Lagging behind his NBA superstar counterparts like Kobe, LeBron and Carmelo in a signature sneaker series, Dwight will attempt to gain some ground with the adiPower Howard.

CK notes that there will be some similarities to adidas’ Beast and Superbeast sneaks that Dwight’s worn in years past.

“The shoe carries over many of the signature details of the previous Superbeast model including a SprintSkin upper, Z-TORSION midfoot bar, and ALIVE cushioning.”

Dwight will jump to the adiPower Howard 2 for the second half of the season.

Also of note for adidas hoops fans is the Pilrahna 5, which has a cool and securing look. Finally, an old favorite for adi hoops peeps, the TMac 2, will hit stores again. Both the TMac 2 and the Pilrahna 5 will be available this summer.