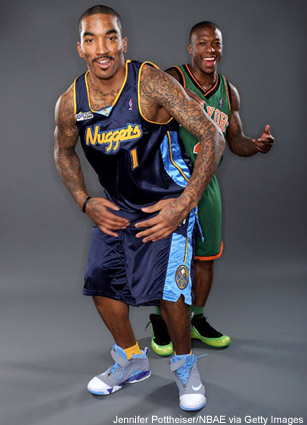 Earl Smith III is one of the League’s most enigmatic players and one of its most eccentric personalities. Since the Hornets made him a first-round pick in 2004 straight out of high school, the Jersey native has averaged 12.5 ppg over seven NBA seasons, mostly as one of the L’s most dangerous sixth men. Smith has also participated in two Slam Dunk contests, and teamed up with Chris “Birdman” Andersen to make his squad the most tatted in pro hoops—in two different cities. Now, he’s rumored to be skipping free agency in favor of the richest contract in Chinese basketball history. The man you know simply as “JR” (despite one brief stint in 2009 when he wanted us to call him Earl again) turns 26 today, so in honor of the notorious Nugget’s birthday and his potential departure from American hoops altogether, we give you a gallery of select kicks from his career to this point. Make no mistake: his sneaks are as schizophrenic as his game. Word to Dan Dickau. Enjoy.