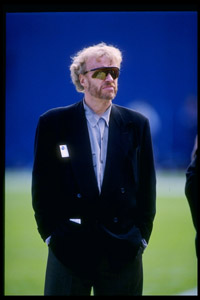 Before he was an entrepreneur, before he was an innovator, Philip Hampson “Buck” Knight was an athlete. As a skinny, sandy-haired kid, Knight ran middle-distance events and ended up at the University of Oregon competing for legendary track coach Bill Bowerman. Besides being an excellent coach, Bowerman was also a trendsetter, always seeking an edge for his runners, right down to modifying track shoes.

Something about that must have stuck with Knight. As a Stanford grad student assigned a paper outlining the creation of a new business, he came up with the idea of importing running shoes from Japan to compete with adidas, whose products were both expensive and difficult to find. Later, on a trip to Japan, he discovered Onitsuka, a Japanese shoe company that was already manufacturing low-cost, high-quality running shoes under the name Tiger. Upon his return, Knight and Bowerman—who each contributed either $500 or $550 in either 1962 or 1963, depending on the account you read—made the project a reality. Knight called the new company Blue Ribbon Sports and started by selling Tigers out of the trunk of his car. That first year they made $364.

It was while working with Onitsuka that Bowerman began to develop some of the innovations that would make Nike the giant it is today. One, a foam wedge for the heel, would eventually lead to the development of the Cortez—which became one of Nike’s earliest successes. The other, the waffle sole, would be the source of one of the most oft-told stories in footwear. Seeking a design that would provide more traction than the usual herringbone, Bowerman poured rubber onto his wife’s waffle iron. And a young company had a sole.

Knight spent much of the early days of Blue Ribbon in the Far East, connecting with Onitsuka execs and quickly learning that he could simplify things by dealing with factories directly. This was a delicate situation—he didn’t want to lose his Onitsuka contacts right away, but he realized for the company to grow, he would need to be selling his own product. He also knew that Bowerman’s improvements were good ones, and that the market was there. In 1971, he paid a local artist $35 for a logo that would eventually be known as the Swoosh. Jeff Johnson, Nike’s first employee, suggested the name of the Greek goddess of victory. Knight’s idea, Dimension 6, was thankfully shot down.

If there’s a common thread through Phil Knight’s career, it’s been trust in others. The most impressive accomplishments on Nike’s résumé—the development of its Air cushioning, the signings of athletes like Michael Jordan and Bo Jackson, the creation of the “cross-trainer”—weren’t implemented by Knight alone. Often, he reportedly didn’t even express much of an opinion one way or the other. But it was he who put the right people in place to make those decisions.

Basketball wasn’t what Nike started with—their first hoop shoe, the Blazer, was just worn by, well, the Blazers—but it was what saved them. In the mid ’80s, running was dead and aerobics was hot, and an upstart named Reebok was supplying the proper shoes. They were lightweight white shoes made out of soft, supple leather—a product Nike couldn’t understand. They eventually produced aerobic shoes of their own, but their salvation was the Air Jordan.

And all the first Jordan—a garish black-and-red high-top with a virtually nonexistent Air unit—did was permanently reinvent the marketing of sneakers. That, more than the fact that it sold millions, is its enduring legacy. The Air Force, introduced in 1982, laid down Nike’s foundation as a basketball brand. The Air Jordan built the mansion. The idea of teaming Mike with a young filmmaker named Spike Lee and an architect-turned-shoe-designer named Tinker Hatfield gave them the world. With LeBron James, they have a shot at the rest of the universe.

These days, Phil Knight isn’t nearly as involved with the company he created. He finally retired as CEO earlier this year, and the only Nike title he retains is Chairman of the Board. And even after 40 years as the head of what became one of the world’s best-known brands, the 66-year-old Knight remains something of an enigma, his office closed to all but a select few, his eyes hidden behind a pair of omnipresent shades. For our purposes, all that needs to be known is this: the old middle-distance runner turned out to be pretty good at the longer runs as well.