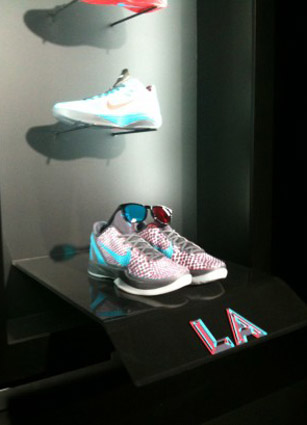 Before the Black Mamba entered the Nike Vault, the elephant in the room was the star of the show.

With a loss to the Boston Celtics still just settling into his psyche on Sunday afternoon, Kobe Bryant’s status at an event all about him—one that Nike flew media in for from across the map—remained a question mark.

Kobe’s competitiveness (and subsequent hatred of losing) is very well documented. So having his Lakers out-played by the Celtics with the basketball universe watching surely didn’t sit very well with him. Still, the man with a fistful of rings rolled through the Vault as scheduled on Sunday to talk about his work with Robert Rodriguez (also in the house) on the soon-to-be-released Black Mamba short, about his sneaker line and about some very personalized apparel.

Quickly, let’s get into the goods.

Nike graphic designer Erick Goto showed us a few things from the Kobe VI line, specifically what Kobe’s been wearing on the court this season, from the neon green Christmas Day shoe to the white/concord and black/yellow joints he’s worn at home and on the road, respectively.

Next up, we got into some cool LA-themed Kobe VIs and Hyperfuses.

Kobe will have three different All-Star sneaks this year, with all three based on L.A.

The East LA Kobe VI sheds the scales that other makeups of the shoe have, in favor of a rich blue colorway. With Goto having been born and raised in East L.A., the shoe was especially personal for him. He drew on things he saw around him while growing up, specifically mentioning lowriders, which he incorporated into the shoe.

Orange County was up next. The shoe’s concept came from a picture of a sunset on the beach, with palm trees in sight. The image has been worked onto the one-piece overlay of the shoe. “Orange County is the center of action sports, so we really wanted to play on that,” Goto said.

Finally, Hollywood comes into the picture. Goto skipped over the obvious silver and gold options with a shoe here and instead went with a 3D theme. While the shoes look like Andy Worhol or Roy Lichtenstein portraits, throw a pair of old school glasses with the red and blue lenses on and the Kobe VIs come to life. The outsole on the left shoe matches the insole on the right and vice-versa, giving the shoe a red look on one side and a blue look on the other.

“This is a fully workable 3D shoe,” Goto said. “The shoes change colors when you’re running in different directions. One side is red, the other blue.”

There are a pair of Hyperfuse lows to coordinate with each of the three Kobe shoes as well that are being sold separately. Don’t expect them to last long. The East L.A.’s went on sale and are gone already.

The other big topic of discussion in the Vault was Kobe’s Black Mamba film. Kobe worked with Bruce Willis, the scary as hell Danny Trejo and Kanye West in the ad, which releases on Feb. 19. As I said above, Robert Rodriguez was on hand and spoke about directing the soon-to-be-released eight-minute short titled, The Black Mamba. The first trailer for the flick went up last week. you can check it out here if you haven’t seen it yet.

The second trailer was debuted at the event on Sunday.

Rodriguez came through rocking a pair of the black/yellow Kobe VIs.

“He always wears cowboy boots—always,” the host of the event said. “I’ve never seen him without cowboy boots.”

Turns out Kobe gave the director a pair of his size 14s to wear to the event.

Rodriguez said that Kobe was a natural in front of the camera.

“Anyone who’s that great at what he does, in order to do what he does on the court, you can’t let antyhing stress you. “He did that in fornt of the camera,” he said.

Kobe said he wanted to do more than just a standard sneaker ad. That led to him approaching Rodriguez about the short film.

“I’ve been a big fan of his for a long time,” Mamba said. “When it came time to do a spot, I had things going on in my mind, shots and angles. Emotionally, I wanted it to jump off of the screen. There’s nobody better to do it than Robert.”

Kobe also said that it was fun to watch Rodriguez, Willis and Trejo in their element too.

“It was cool for me. I’m fascinated by how great people do what they do,” he said. “It’s all about the details and the passion … a lot of the same things that I do on the court.”

Here’s some video of Kobe talking about the short with the LA Times.