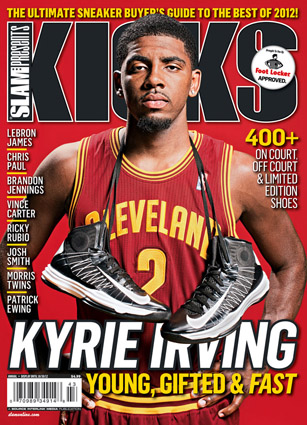 A couple of Wednesdays ago, after an evening of cancelled flights and, ultimately, an eight-hour overnight drive, I arrived at Cleveland Clinic Courts 40 minutes early for the KICKS covershoot. Sleepless, stressed and on the verge of a complete mental meltdown, I was one more mishap away from going off. I was one pushy handler, one late-arriving subject, from letting someone have it.

Then, with 15 minutes still to go until call time, Kyrie Irving walked into the Cavs’ breathtakingly beautiful practice facility with three of his friends and my mood changed.

When I was assigned to write about Irving for the cover, I immediately had an angle in mind: Based on a slew of factors—he’s camera-ready  (singing in the school show at St. Pat’s helped him overcome stage fright), charismatic (that comes from his dad, who’s also a people-person), comfortable in his skin (“that’s just me”) and well-rounded (tried out for football as freshman, skateboarded for four years and played varsity baseball as a high school senior)—Irving, an endorser of Nike, is well on his way to becoming one of the most marketable players in basketball.

Well, within moments of meeting Irving, my hypothesis was confirmed.

From catching a 5:30 a.m. flight that morning and arriving early to our shoot, to making eye-contact when answering tricky questions, to working well with our dope photographer, to making everyone in the building feel like his long-time friend, Irving proved himself to be one of the most mature, likable 20 year olds around.

People paid to cover basketball have known about Irving’s game, if not his personality, since his high school days at St. Patrick in Elizabeth, NJ. People who are pretty steeped in basketball found out about him in his injury-shortened season at Duke and were reminded of his prowess during his Rookie of the Year season in Cleveland. Casual fans, though, really learned about him this past spring, when, in conjunction with Pepsi Max, Irving unveiled his Uncle Drew character.

With that on his marketing resume, Irving is now ready to do the same for Nike, is now ready to become the newest face of Swoosh’s basketball wing. After all, having grown up watching his dad, Drederick, maneuver on Wall Street, Irving is schooled beyond his years in business. He knows the deals he currently has, envisions the future deals he wants, and he knows what he wants to do with the fortune and fame.

“This is something that I want to feed my family doing for long time,” Irving says. “It really makes me happy, seeing my father happy, basically being able to give him anything he wants. He made so many sacrifices for me to get here.”

Irving refers to himself as the “Universal Player” because of the way his game was honed, because he grew up playing in the suburb of West Orange but would make weekly forays to play in the Bronx borough of NY where his dad grew up, because he played at all-white Montclair Kimberly Academy and then transferred to, what he terms, the “polar opposite” St. Pat’s. He credits his diverse street-meets-burbs game—what Sandy Pyonin, his trainer and AAU coach, calls old school, new school—to playing in those varying environs. What goes unsaid, but certainly not unobserved, is how those same experiences molded him into a universal, cross-cultural pitchman.

The perfect pitchman for Nike.

Still, Irving realizes this is just the beginning. Rookie of the Year, star of a viral video, wearer of Nike, on the cover of KICKS—it’s all great. But Irving wants to do even more next year. “I was trying to figure a lot of things out last season, so I didn’t really feel comfortable playing my complete game,” Irving, who’s coming off of a fractured bone near his pinkie that required six screws, says. “I feel like next season I’m gonna bring a new gear, a new level, that I didn’t get a chance to show. A year under my belt, and now the game’s just gonna slow down, my third year it’ll slow down, and my fourth it’ll slow down…I think I can become one of the best in the League.”

Now that, even in my sleep-deprive state, sounds like a scary thought.

Aside from my story on Irving (which includes details about his injury, childhood in NJ, recent bet with Kobe, preferred Nikes and more), KICKS 15 is packed with all of the usual goodness. There are particularly dope stories on Chris Paul, Ricky Rubio, spoken word artist Lemon Andersen and AND1, and pretty much every major sneaker brand is featured. Throw in a couple of kicks-as-the-messenger-to-kids stories, some amazing visuals, and you have yourself a great issue.

And you have yourself KICKS 15.