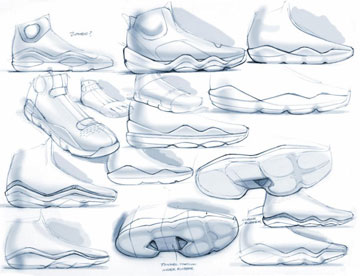 There’s no way you could be watching television toward the end of last year and not come across one of adidas “Fast Don’t Lie” commercials featuring Derrick Rose, Dwight Howard and actor Ken Jeong as the Benjamin-piling, lady-pyramid-topping-mogul, Slim Chin.

It was a very comical introduction to not only Rose and Howard’s signature lines, but the brands new commitment and focus to “Light Done Right.”

In a three-part interview, adidas senior designer of basketball footwear Robbie Fuller goes into detail about the brands Spring 2011 lineup,

the adiPure, Super Beast and Rose 1.5 as well as discussing what makes each pair unique and what goes into making fast, even faster without losing the elements of supreme comfort and stability.

Our first profile will be on the adiPure, which is the brands team shoe.

While not being a signature model, the adiPure doesn’t lose any ground in style, comfort or having a great story behind it.

SLAM: This shoe is comprised almost entirely of Sprintskin, what is the benefit of this material?

Robbie Fuller: When you mold that material, which is kind of a mix between rubber and polyurethane, it can be really, really fine and because of the mesh, you get breathability throughout. Another way to think of it is thinking about the Shell Toe, the rubber toe. It’s like we took that and [perforated] it, so that you have a breathable shell toe and then just took it and wrapped it all around the shoe. That was kind of the initial idea of the adiPure. It has a really interesting story if you’re willing to hear it.

RF: AdiPure kind of started from a couple of years ago. We were just talking like what would Adi Dassler, founder of the company, if he were alive, what would he build? He would only build the best, only the best for the athlete. It kind of started off as a Blue Sky Project. What do basketball players need as far as the product is concerned? They need complete stability, they need to be as low to the ground as possible but don’t give up the cushioning. For the upper, we were like; they need protection, support and breathability. That shoe is at least two and a half years in the making. Kind of trial and error and we finally finished it up and we were like, ‘Wow, what do we do with it?’ [Laughs.] We have this great shoe, what can happen? We thought Spring ’11 was the perfect time to bring it to market. We felt like we had the right athlete’s and the right momentum.

It kind of takes the Pure Motion platform that you saw on the Fall ’10 Rose and Dwight and brought it inside, so we overlapped it. We took the upper and wrapped it around the midsole. We used the full adiPRENE plus for the internal midsole. Imagine the ball that you can buy at the grocery store for 25 cents, the bouncy ball. That’s pretty much the material. You have that ball and you drop it on the ground and it just bounces and bounces. So, it’s got really high energy return.

We constructed the shoe so that you don’t really – it’s not built like the normal way. It’s built so that you stand directly

on the foam, which allows you to be lower to the ground but keep the same cushioning. It’s got more Sprintskin than the other two. It has it on the toe and the side panels, and for Dwight, it’s just allocated to mostly the sides and about the same amount for Derrick.

SLAM: The adiPure is featured in very bright colors, is that a way to make this shoe kind of stand out and not get lost amongst Super Beast and the Rose 1.5?

RF: Absolutely. As far as what we sold the most, the black with the white stripes, more classic adidas look, but we definitely wanted to scream loud and proud that these need to get found by every basketball players. Green is “Intense Green,” the yellow kind of matches the same yellow that you’ll see Derrick in for the first half of All-Star.

SLAM: With the adiPure, like you said, it features the Pure Motion pod tech, could you explain what that does?

RF: Just think of it like, if the tooling has really sharp edges, that means that you have more of a chance to kind of – it makes a lever and if you go too far past that edge, you’ll keep going. It’s not a smooth transition. What the Pure Motion does, which is similar to what we started back in the day with “Feet You Wear,” was just completely copying the radius of the foot. That way, when you go and make a cut, you’re kind of rolling into a smoother transition into the cut as opposed to a really hard angle that you’re trying to roll on to. It’s simple technology but it’s just appropriate, copy the foot. Those pod areas, we left them completely flat and suck in the other areas around the foot where you don’t need the extra support. That’s why there’s pods when you flip it over and it looks kind of like a foot. Those are the zones that we saw from pressure-mapping where you need complete ground contact. The way their kind of laid out, we call them dynamic stability triangles. You can draw a triangle from any of the three pods that are connected to each other. What that does, is that’s the lightest solution for stability.

Think about it like a chair. You can have a chair with four legs, you can have a stool with three legs, but you can’t have one with two legs. Three is the lightest orientation for support, but that goes along with how it got light.

The adiPure is in stores now.