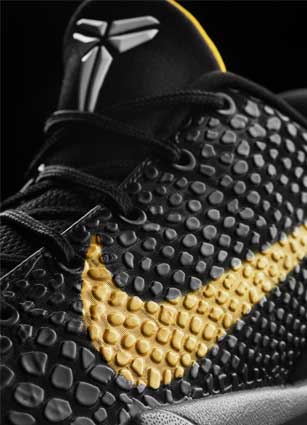 
If you’ve got your copy of SLAM 144 (on sale now, people!) you might have noticed that we jumped the gun a little bit in our Kicks section. We went ahead and showed you a unique colorway of the Zoom Kobe VI a little bit earlier than we should have. Our bad, your gain, right? Right.

Nike dropped the official info today on the VI, which is easily the most Mamba-like out of any of the shoes the Swoosh has done for Kobe. I’ve pasted the release in its entirety below, but I wanted to talk about a few standout points.

The Eric Avar designed sneak is all about Kobe’s Black Mamba persona. While the shape of the shoe stays true to the ZK IV and V, this one is more reptilian, I guess, in its makeup. Nike calls the scaly look to the shoe “islands” that are designed to protect against abrasion and to provide durability.

More tech stuff: Dual-layer memory foam sockliner for a custom fit; a phylon injected midsole for cushioning and Zoom Air units in the heel and forefoot for additional comfort.

Nike used Flywire technology again in the shoe, but this time put a three-layer construction together, with a layer of mesh inside the shoe to line the foot, a layer of Flywire in the middle that’s sandwiched underneath the breathable mesh that has the polyurethane islands that was mentioned earlier. Nike says it makes the shoe lighter, more breathable and more conformable to the foot than the the Kobe IV or V.

The shoe launches on Dec. 26 in stores and on nikestore.com. NIKEiD will tease fans with customizable options on the shoe through their Facebook page on Dec. 10 and customized versions of the ZKVI will go on sale on Dec. 24 at NIKEiD.com

The release follows after the pics.

“The Kobe VI is a very character driven shoe with the alter ego of the Black Mamba prominently featured,” said Bryant. “We continue to evolve the technology to make it a performance based shoe, but aesthetically you haven’t seen a shoe pop like this before. It brings to life what drives me.”
Nike Performance Footwear Creative Director Eric Avar led a team of creatives who worked with Bryant to bring the Black Mamba to life in the Nike Zoom Kobe VI. The shoe’s upper features unique polyurethane “islands” that emulate a snake’s skin and increase or decrease in size throughout the shoe to protect against abrasion and increase durability exactly where needed. To add a lighthearted spin and play off the reptile’s deadly venom, “Venomenon” is inscribed on the front outsole.

“The Black Mamba to Kobe means being one of the deadliest predators on the planet,” Avar said. “That’s his approach to every game – he’s very calculating and he’s very quick.”

A customized fit
Bryant challenged designers to build a shoe with amazing fit. Nike responded with an innovative dual-layer memory foam sockliner that conforms to the foot for a one-of-a-kind custom fit. A Phylon injected midsole adds cushioning for a more anatomically correct fit, and Nike Zoom units in the heel and forefoot provide additional comfort on court.

To emphasize Bryant’s lethal on-court play, Nike’s team of designers built off the success of the Nike Zoom Kobe V shoe’s lightweight, low-cut profile. This year’s shoe features reduced midsole thickness to keep the foot closer to the ground for improved stability and better court feel. The shoe fulfills Bryant’s desire for a true low-top, similar to that of a running shoe or soccer boot, with a low collar design.

The basketball shoe also employs Nike’s innovative Flywire technology in a new, three-layer construction. Inside the shoe a layer of mesh lines the foot, followed by a layer of Flywire and topped off by another layer of breathable mesh with polyurethane islands for abrasion resistance. This unique construction is lighter, more breathable and more conformable to the foot than previous Flywire designs in the Kobe series.

To ensure excellent traction, the Nike Zoom Kobe VI has a solid rubber outsole with a Black Mamba inspired modified herringbone pattern. Certain China editions of the shoe include XDR, or Extra Durable Rubber, for sustained durability against the rough surfaces of outdoor basketball courts.

Blending science and art
The Nike Zoom Kobe VI emerged directly from conversations between Nike’s team and Bryant to ensure the shoe best suited his singular style of play.

“I always talk about good design being a balance between science and art, and one of the great things about working with Kobe is he always grounds every conversation in that concept, starting with the science,” said Avar.