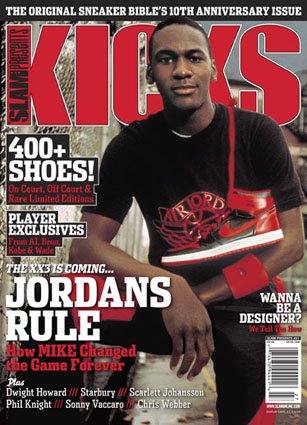 This must be the ultimate tease for the Wizards’ poor fans. Michael Jordan joins the team as a suit, not a player. What’s next, Shaq signs on as coach? It’s typical D.C. basketball stuff. Since the franchise captured the ’78 title, it has won a total of three Playoff series. So what else did you expect? Jordan wasn’t going to ride in and save the team with his on-court heroics. Nope, he’s in the corporate life now, and that means sharp threads and trying to find a way to make the Wizards good, despite a roster of overpaid players who have little or no value to anyone else in the League.

Yet the Jordan aura remains. Just the idea that he was signing on to direct the Wizards’ latest rebuilding effort gave fans hope that the job might actually be completed this time. That’s the Jordan mystique. Even if he won’t be affecting the game directly, he’s on the team, and that means something, especially given his renowned distaste for losing.

While Wizards fans hope and pray that MJ can make magic happen from the boardroom, the rest of us still marvel at how his name still carries the mail. Head to Grand Central Station in NYC for a meal at his steakhouse. Not only is the food mighty fine (the rib eye is to die for), but there is still something special about eating at a place named for the man. He has transcended the world we mortals inhabit and become something generally reserved for giant, money-sucking corporations. He is a brand.

Besides the restaurants, there are Jordan stores that sell everything from cutlery to umbrellas, and there are Jordan clothes. And, of course, there are the shoes. Just imagine some other athlete trying to sell kicks bearing his name more than a day after retiring. But Jordan can still put out a line of his Air gear and send the world scurrying to stores in hot pursuit—and paying full freight. College basketball teams wear uniforms and other gear bearing his “Jumpman” likeness. And, in perhaps the biggest compliment in sports apparel history, other NBA players are being paid to wear his shoes. Think about that. Nike. Adidas. Reebok. Fila. Jordan Brand. It’s insane.

Complain all you want about how Jordan was packaged from the moment he left Chapel Hill for Chicago, but the end result is remarkable. He may not have the moves and hops he did a decade ago, but he has more money and better prospects. His endorsement opportunities have changed, but his income potential is limitless. He’s selling his name, and that will go on forever.

Think of it this way: Jordan spent his NBA career building a reputation on quality. He won five MVP awards (and should have received two or three more). He earned six championship rings. He made big shots at big times, in front of big audiences. Even that catastrophic flirtation with baseball wasn’t so bad, since it proved him somewhat fallible and showed that even icons have dreams that don’t always come true. The end result? A giant bling-bling at the cash registers.

And we’re not just talking about business success here. Plenty of big-name athletes have gone on to success in the corporate world. Jordan has pulled off a remarkable double here. He is thriving atop a commercial structure that has himself as its main product. Still. If he somehow manages to make the Wizards win, he may just be swept up at that moment by the gods and have deity status conferred upon him.

Then D.C. will have to wait another 25 years to win. Figures.