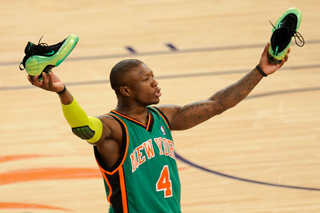 Just got word from Foot Locker that Nate Robinson will make a special St. Patrick’s Day appearance at the House of Hoops in Harlem (268 W 125th St) this afternoon from 4–5:30 to debut his green KryptoNate shoe’s retail release. For anyone in NYC who’s reading this and is physically capable of travel, considering what day it is,  I hope you get down to House of Hoops to take part in this. As far removed as I am from the event, I’m hyped about it!

Also, anyone around 34th St. and 7th Ave in NYC can check out the Swoosh’s Nate-themed 80-foot billboard.

Press release is below.

WHAT: The David versus Goliath 2009 slam dunk showdown has become legendary.  When Nate Robinson surprised the Phoenix crowd and international TV audience with a pair of neon green Nike Foamposite Lites to defeat Goliath the crowd was stunned.  The hysteria over the shoe began immediately.

The luck of the Irish will shine in Harlem on St. Patty’s Day, March 17.  For everyday basketball fans and sneaker heads alike the demand for the green Nike Foamposite Lite has grown to a fever pitch.  The shoes have not been available in retail stores up to this point.  The wait is finally over.

Nate Robinson will join forces with Nike and Foot Locker’s Harlem House of Hoops for an exclusive release event on St. Patty’s Day.  The Nike Foamposite Lite established itself as one of the most memorable basketball centerpieces in recent memory and now fans can join in the action.  To further support Robinson and his heroic victory, Nike recently unveiled an 80-foot billboard on 34th Street and 7th Avenue in New York City.  The billboard, which displays an image of Robinson, reads “Leaps Tall Centers.”