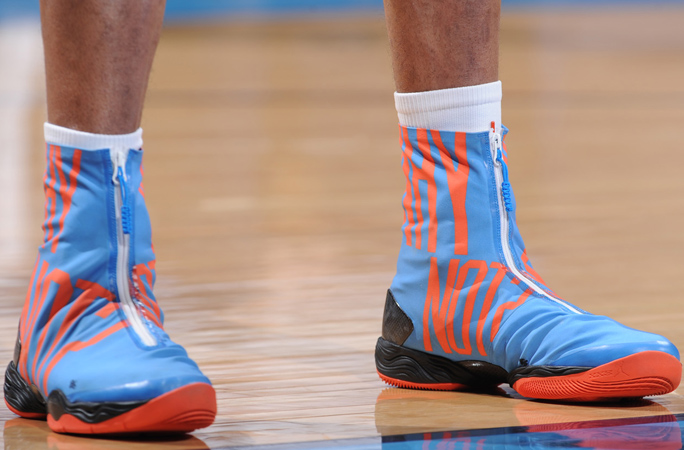 The Oklahoma City Thunder have evened things up with the San Antonio Spurs, as OKC came away with an impressive 111-97 victory in Game 4. Kevin Durant—in his Nike KD 8—led the way with 41 points, while Russell Westbrook brought out a PE Air Jordan XX8 as he filled the stat sheet once again. Other worthwhile kicks from this game included Kawhi Leonard in the Air Jordan XX9, LaMarcus Aldridge in the Jordan Ultra.Fly PE, Randy Foye in an eye-catching Nike Zoom HyperRev 2016, and Dion Waiters in a NIKEiD Kyrie 1.

In Atlanta, King James and company sent Atlanta home for the summer with a narrow 100-99 victory, completing the four-game sweep. James wore his Nike LeBron 13 Elite while Kevin Love dropped 8 three-pointers in the Nike Hyperdunk 2015 en route to finishing the night with a game-high 27 points. Also rocking the Hyperdunks were the Hawks’ Dennis Schroder and Al Horford.