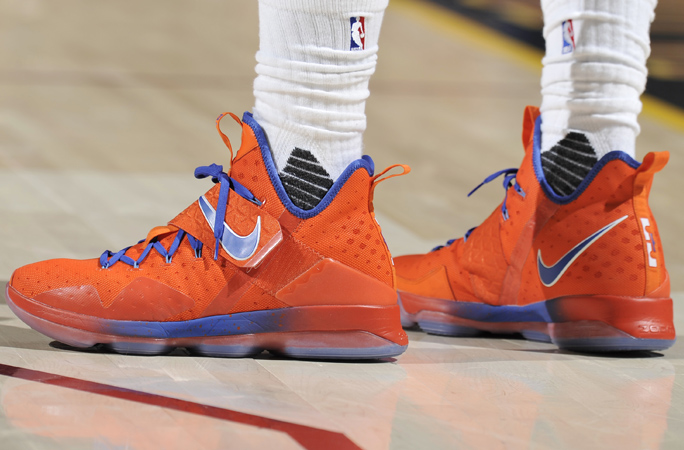 LeBron James continued the roll out of his Nike LeBron 14 with the debut of the “Hardwood Classics” colorway in the Cavs’ matchup against the Chicago Bulls. The creamsicle-colored model was certainly the night’s most eye-catching pair as it tied back perfectly to Cleveland’s throwback uniforms. Iman Shumpert went back to wearing Js, as he rocked the Air Jordan X Retro “Double Nickel.” For the Bulls, Dwyane Wade took the floor in an all-black pair of the Li-Ning WoW All-City 5 while Jimmy Butler wore the “Space Jam” Air Jordan XXXI.

In the Thunder-Hornets game, several Jordan Brand models were on display as the teams featured several of its athletes. Russell Westbrook was once again in the XXXIs, Victor Oladipo wore his familiar Jordan Extra.Fly, Kemba Walker played well in the Jordan Super.Fly 4, Frank Kaminsky wore the new Melo M13 and Michael Kidd-Gilchrist debuted the Jordan B.Fly.

If you missed any of Wednesday night’s sneaker action make sure you get all caught up in our latest gallery.