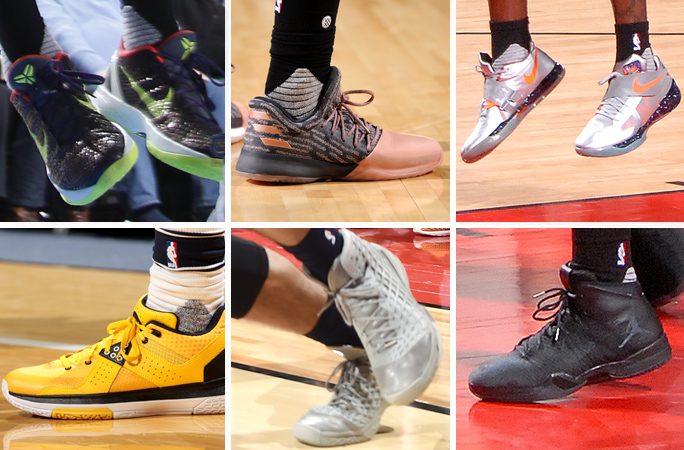 Houston vs. OKC. James Harden vs. Russell Westbrook. Adidas versus Jordan Brand. Despite Westbrook dropping a career-high 8 three-pointers and finishing the night with 49 points, it was Harden and the Rockets doing just enough to get by the Thunder. Harden debuted the “Gila Monster” colorway of his adidas Harden Vol.1 while Westbrook with a triple-black edition of the Air Jordan XXXI. Montrezl Harrell is turning out to be a legitimate contender for the League’s biggest sneakerhead as he brought out the Nike Zoom KD 4 “Galaxy” ASG.

Speaking of the NBA’s reigning sneaker king, P.J. Tucker brought out the Nike Zoom Kobe 6 Supreme “Chaos” in the Suns game versus the Mavericks. DeMar DeRozan might still be in the holiday spirit as he rocked the Nike KD 9 Elite “Christmas” in Toronto’s win over the Jazz. Fellow Kobe addict Trey Lyles wore the Nike Zoom Kobe 3 “FTB” for Utah.

Recapping other notable models, Damian Lillard made a successful return for the Blazers in the “Rip City” edition of his adidas Dame 3 and Glenn Robinson took the floor in a fresh yellow colorway of the Li-Ning WoW All-City 5.

For a look at the rest of the night in kicks, we have a 30-plus image gallery for y’all to enjoy.