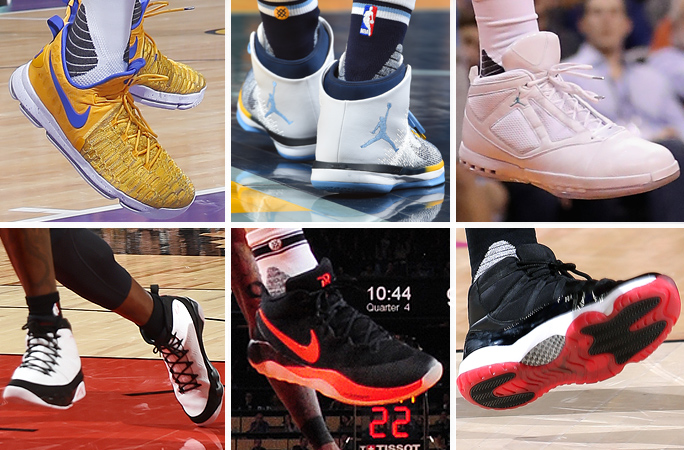 Air Jordans are a staple in our daily NBA Kicks of the Night coverage and Sunday proved just that with several notable models being worn on court. We start off with the rarest pair of the evening as P.J. Tucker once again brought out the “SoleFly” Air Jordan XVI Retro for the Suns affair against the Cavs. Detroit’s Markieff Morris went with the “Bred” Air Jordan XI Retro while Montrezl Harrell of the Rockets rocked the “Space Jam” Air Jordan IX Retro. In Memphis, Mike Conley took the floor in two pairs of team colored Air Jordan XXXI PEs.

Nike Basketball has started to roll out its latest model in the Nike Zoom Rev 2017 which was seen on a couple of players last night. Devin Booker and Draymond Green wore team PE colorways while DeMarcus Cousins went with the all-black model. Closing out other Sunday notables, DeMar DeRozan was spotted in the Nike Kobe 9 Elite “BHM,” Kevin Durant wore an almost all-yellow PE of his Nike KD 9, Marcus Morris played in the “Dr.Doom” Nike Air Foamposite Pro and James Harden wore the ‘Home’ model of his adidas Harden Vol.1.

Peep the all of these kicks and more in our newest Sunday night NBA kicks recap.