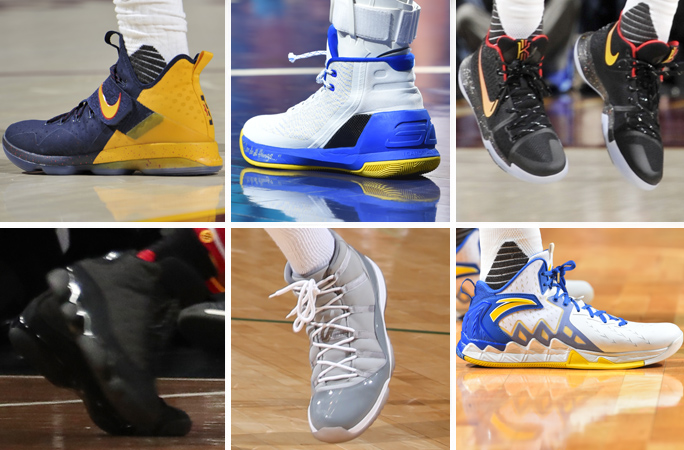 A night after having sneakerheads drooling over his PE Air Jordan XIIs, Jabari Parker had ‘heads salivating once again with his Air Jordan XI Retro “Cool Grey” kicks in Milwaukee’s matchup with the Philadelphia. Unfortunately, for Parker and company, the 76ers came out with victory led by Nerlens Noel, who took the floor in the Nike KD 9.

In Cleveland, the Cavaliers struggles continued as the team fell to the Kings, 116-112. Both LeBron James and Kyrie Irving rocked new colorways of their signature models, the Nike LeBron 14 and Nike Kyrie 3, but DeMarcus Cousins’ near triple-double in the Nike Zoom Clear Out and Arron Afflalo’s late three-pointer led Sacramento to the W.

Other notable models hitting the floor on Wednesday night included the “Black Cat” Air Jordan XIII Retro, worn by James Johnson of the Heat, Jrue Holiday rocking a navy colorway of the Nike PG1—and the Warriors game against the Hornets also provided us with solid shots of Stephen Curry’s Under Armour Curry 3 and Klay Thompson’s Anta KT2.

Make sure to peep all these and more in our latest NBA Kicks of the Night recap.