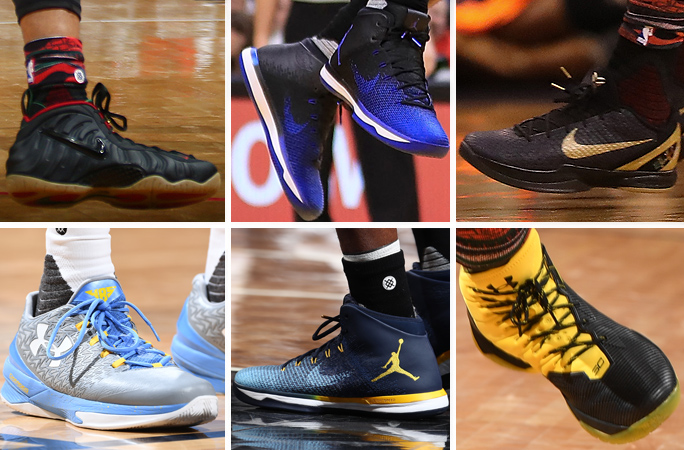 Monday night was big one for sneaker fans, in particular for those that fancy some of Nike’s most high-profile models. The Nike Hyperdunk 2016 has been a very popular sneaker around the League, and Monday saw plenty of colorways hitting the floor. Nikola Jokic had one of the evening’s best performances in the shoe—he dropped a triple-double as the Nuggets spanked the Warriors 132-110. That game also showed just how popular the Nike KD 9 is—several players took the floor wearing it, including KD himself along with the Nuggets Malik Beasley, Jameer Nelson and Juan Hernangomez.

Another model seeing plenty of action on Monday was the Air Jordan XXXI. Mike Conley led the way with his Grizzlies PE while Jeff Green and Otto Porter Jr. went with “Royal” and “Bred” models respectively. The Spurs duo of Kawhi Leonard and LaMarcus Aldridge also wore the the flagship Jordan Brand model, along with Bucks’ Greg Monroe and of course Russell Westbrook.

Other models that caught our eye on Monday included Stephen Curry wearing his Under Armour Curry 2.5, Langston Galloway in the BHM Nike Zoom Kobe 6, a close-up shot of Will Barton’s Under Armour ClutchFit Drive 3 Low and Trey Burke stealing a bit of teammate Markieff Morris’ Foam spotlight, as he wore the Nike Air Foamposite Pro “Gorge Green.”

More than 40 images of kicks are in our latest gallery so make sure you get caught up on all the action.