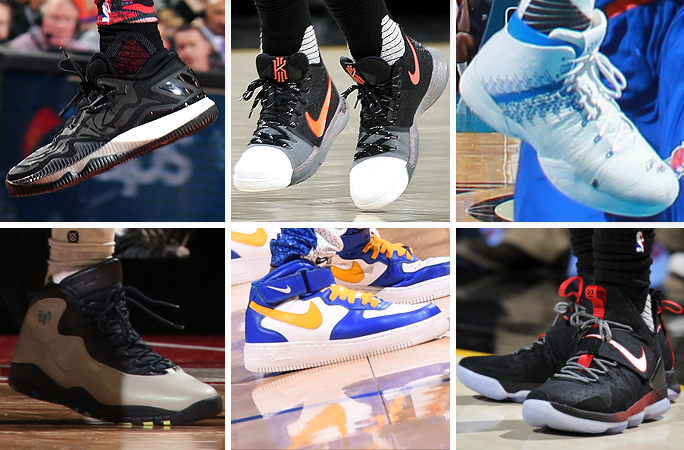 With NBA All-Star Weekend just a few days away, many teams were playing their final game before going into the break. 15 games were on the schedule last night which meant sneakers galore for fans to enjoy.

As we’ve done often times in the past, we lead off with Cleveland’s LeBron James and Kyrie Irving who both broke out fresh colorways of their signature models. James rocked a black/red edition of his Nike LeBron 14 while Irving went with a black/grey/mango Kyrie 3. For Indiana, Paul George went with a classic black/chrome version of his Nike PG1.

After dropping their last two games, Russell Westbrook got the Thunder back on track with another triple-double performance. On Westbrook’s feet were one of his newer Air Jordan 30.5 PEs. Detroit’s Andre Drummond rocked two pairs of Xs in the Pistons’ win over the Mavericks bringing out both the white/gold “OVO” and the “Rio.” Teammate Marcus Morris went with last season’s “BHM” Nike LeBron 13.

Another 40 images of last night’s NBA kicks are just a few clicks away so make sure to check them out.