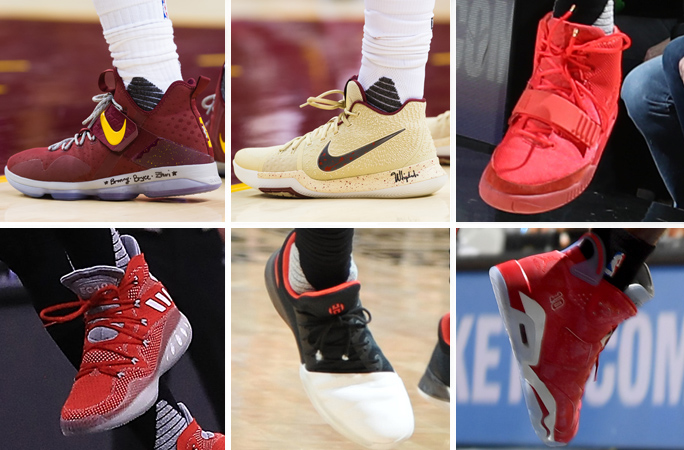 PJ Tucker, the reigning King of NBA Sneakers, wasted no time in asserting his dominance as he broke out one of the more coveted pairs in recent memory when he took the floor of the Quicken Loans Arena in the “Red October” Nike Air Yeezy 2 SP. While Tucker broke the necks of sneakerheads worldwide, LeBron James donned a crisp wine-colored Nike LeBron 14 PE and Kyrie Irving went with a new edition of his Nike Kyrie 3 as they led Cleveland to a Game One 116-105 victory over Toronto. Irving then gifted his game-worn sneakers to rapper Dave East.

In San Antonio, it was the Beard putting on a show in the “Pioneer” adidas Harden Vol.1 as the Rockets torched the Spurs, 126-99. Notable kicks in this one included all the Air Jordan XXXI PEs seen on the feet of Kawhi Leonard, Jonathon Simmons, LaMarcus Aldridge and Nene, Bobby Brown’s Air Jordan XIII Retro “Bred,” Montrezl Harrell’s Air Jordan VI Retro “Slam Dunk,” and Eric Gordon’s adidas Crazy Explosive PE.