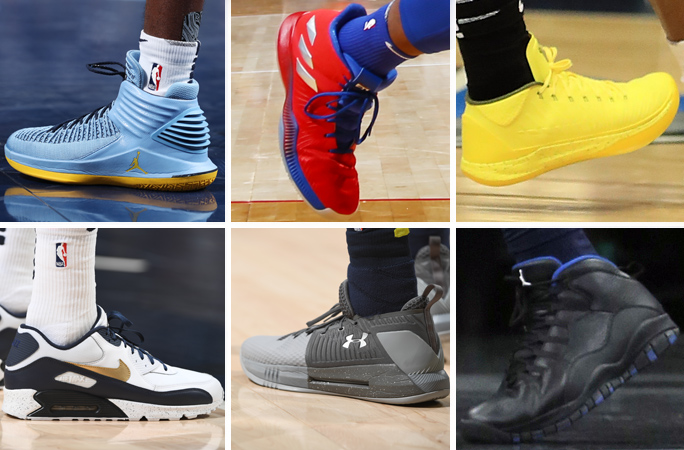 The NBA’s opening week continued with 11 games last night and several stars shining in fresh colorways of familiar models, while others broke out their respective brand’s latest and greatest.

John Wall got Washington off to a winning start in the Nike PG1, Giannis Antetokoumpo continued to rock Mambas as he dropped 37 points on the Celtics in the Nike Kobe A.D. Mid “Detached,” Damian Lillard cooled the Suns in his “Triple Black” adidas Dame 4, and Mike Conley started his season strong in a fire PE of the new Air Jordan XXXII.

Some of the night’s other notable wears included Jimmy Butler going retro for his T-Wolves season debut as he donned an Air Jordan X PE, Joel Embiid and Ben Simmons gave Sixers fans reasons to be excited as they wore the adidas Mad Bounce and Nike Hyperdunk 2017, respectively, and James Harden led the Rockets to a 2-0 start dropping by 27 on the Kings in his signature adidas model.

Peep the rest of the night’s kicks up top.

Related
Post Up: Giannis Goes off in Boston and More from Day 2 of the ’17-’18 Regular Season