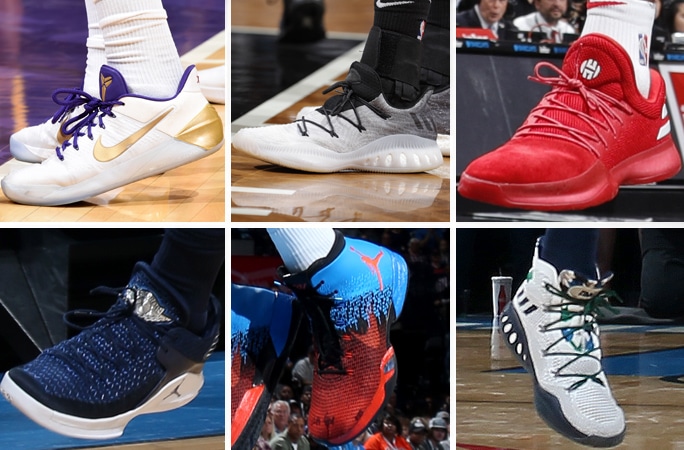 Just when it looked like Carmelo Anthony–in his Jordan Melo M13–had hit a potential game winner for OKC, Andrew Wiggins sprung into action. Rocking his trusty adidas Crazy Explosives, Wiggins dropped a deep buzzer-beating three on Oklahoma City to lead Minnesota to a thrilling 115-113 victory. Russell Westbrook scored 31 in a pair of his Air Jordan 30.5 PEs while Jimmy Butler brought out a navy PE of the Air Jordan XXXII.

In Los Angeles, the Pelicans got their first win of the season with Anthony Davis and DeMarcus Cousins leading the way in the Nike Air Max Dominate. Lonzo Ball dropped a near triple-double in his BBB ZO2 Prime Remix while Jordan Clarkson led the Lakers in scoring in the Nike Kobe A.D. Mid “Optimism.”

Out in Brooklyn, D’Angelo Russell led the Nets to a victory over the Hawks in an all-white pair of the Nike Kyrie 3.

Check out the rest of Sunday’s best NBA kicks just ahead.

Related
Post Up: Wiggins and the Wolves Win in OKC