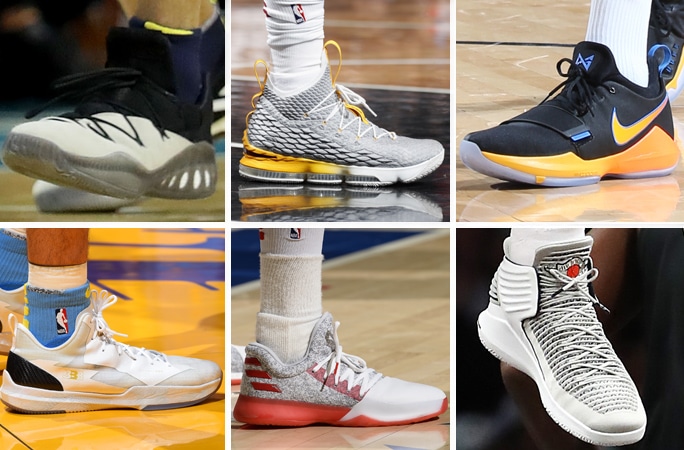 In the much anticipated match-up between Lonzo Ball and John Wall, the veteran outperformed the rookie, but it was Ball helping lead his team to the win. Ball debuted a white colorway of his BBB ZO2 Prime Remix while Wall went with his go-to model this season, the Nike PG1. In Brooklyn, LeBron James wore a grey PE of his Nike LeBron 15 in the Cavs upset loss to the Nets while in Philly, Eric Gordon sunk the Sixers with a buzzer beating three in his adidas Crazy Explosive Low 2016 PE to lead Houston to the victory.

Other noteworthy kicks hitting the floor included Dwight Howard in a Hornets colorway of his latest signature model, the Peak DH3, which happens to be the world’s first 3-D printed basketball sneaker, Jamal Murray in the adidas Consortium ADO Day One Crazy Explosive Low, Jeff Green, Victor Oladipo and Andre Drummond in Air Jordan XXXII PEs and Paul George in another dope PE colorway of his Nike PG1 and Stanley Johnson in the “EYBL” Nike Kyrie 3.

Langston Galloway stunted the hardest, going with the ultra-rare Nike Air Zoom Generation “Gloria.” The colorway, named after LeBron’s mother, dropped back in 2004 in very limited quantities, mostly for friends and family of the King.

Check out the rest of Wednesday’s NBA kicks up top.