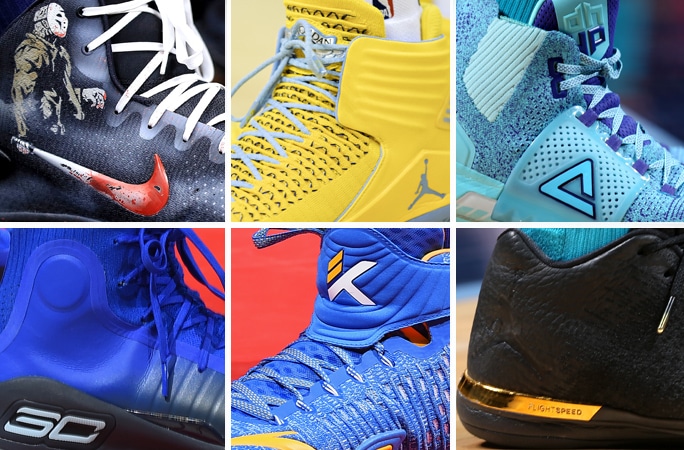 Karl-Anthony Towns really got into the Halloween spirit with an incredible pair of custom Nike Hyperdunk 2017s. Created by Kickstradomis, this design featured a “Friday the 13th” theme with Jason Voorhees holding the Swoosh like a giant machete.

Stephen Curry broke out a blue/black colorway of his hit Under Armour Curry 4 while Klay Thompson impressed with a blue/yellow number of his Anta KT3.

Mike Conley snapped more necks with another Air Jordan XXXII PE while Michael Kidd-Gilchrist went with a more stealthy option in the Air Jordan XXXI “Black/Metallic Gold.” The Nike PG1 continued to be a popular option on Monday night and Ed Davis wore a tough black/gum number. Rounding out the rest of the night in kicks, James Harden went with a grey/red version of his adidas Harden Vol.1 and Kristaps Porzingis had another 30 point game in his adidas Crazy Explosive Primeknit 2017 PE as the Knicks won their third straight.

If you haven’t done so already, make sure to give us a follow on our SLAMKICKS Instagram to keep up-to-date with all the latest and greatest in NBA kicks.