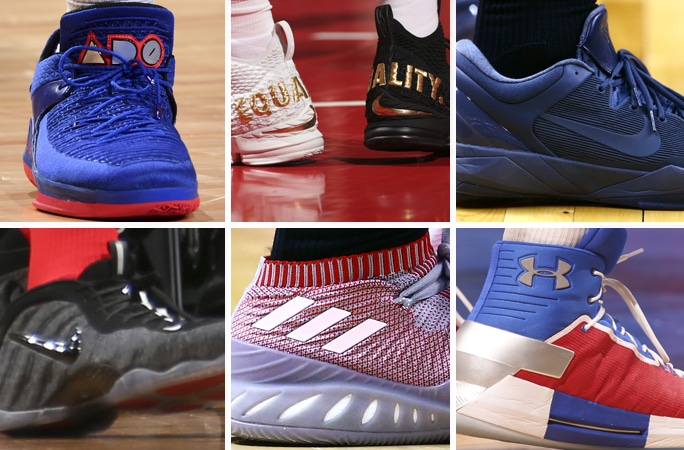 LeBron James continued to make a statement with his sneakers as he debuted a new colorway of his “Equality” Nike LeBron 15. James, who initially rocked the black and gold version during the team’s season opener, brought out the white version in last night’s affair with the Wizards as he took the floor in both colorways before swapping out to his wine/black Nike Zoom LeBron Soldier XI later on in the game.

For the Wizards, Markieff Morris once again played in a Nike Foamposite model as he brought out the Foam Pros in wool, John Wall continued with the Nike PG1 and Bradley Beal stayed true to the Nike Hyperdunk 2017 Low.

A great shot of Andre Drummond’s Air Jordan XXXII in royal and red is in our latest gallery and it show’s Drummond’s awesome logo on the tongue. Teammate Anthony Tolliver had the night’s wildest pair as he wore the Under Armour Icon Drive 4. Other noteworthy kicks on the evening include the Raptors’ duo of DeMar DeRozan and Kyle Lowry with DeRozan going with the Nike Zoom Kobe 7 FTB and Lowry in his adidas Crazy Explosive Primeknit Low 2017 PE.

Make sure to check out the rest of Sunday’s NBA kicks just ahead.