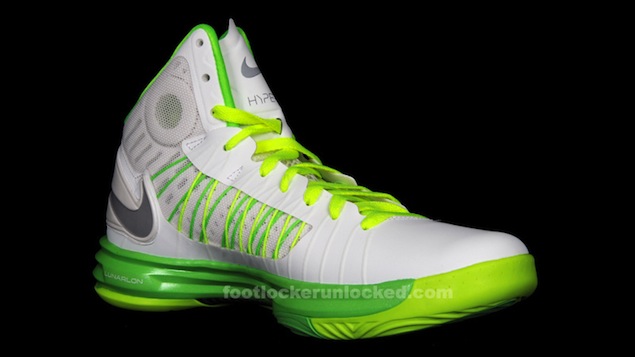 Nike’s Hyperdunk 2012 dropped today in five colorways—one being the amped-up Nike Hyperdunk+, the first basketball shoe equipped with Nike+ technology. The other four are in the above gallery, and have been deemed the “Olympic Pack.” Four teams will wear the Nike Hyperdunk at the London Games—USA, China, Puerto Rico, and Brazil (PR is still looking to earn their spot in London at the FIBA World Olympic Qualifying Tournament in Caracas, Venezuela next week). All four of the Olympic Pack colorways are the “Away” versions.

The Lunar Hyperdunk itself is different from the ’11 edition, which was one of the L’s most popular last season. This year, the Hyperdunk has the latest Flywire technology, exposed on the side of the shoe, plus foam to keep the shoe lightweight and Lunarlon midsole cushioning (common in Nike running shoes) tailored specifically to hoops.

The Nike Lunar Hyperdunk Olympic Pack released today, June 29, at House of Hoops by Foot Locker locations and Footlocker.com for $140.