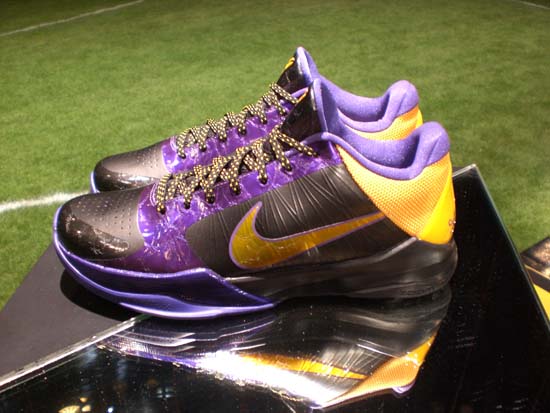 I’ll have much more on this later in the week, but for now, a brief introduction. Nike was kind enough to fly SLAM (along with a select group of national and international media) to Los Angeles for the introduction of Kobe Bryant’s latest on-court shoe, the Nike Air Zoom Kobe V. It was presented on the floor of the old Forum by Kobe himself, along with designer Eric Avar and senior researcher Matt Nurse.

Lower and lighter than the Zoom Kobe IV, the Zoom Kobe V is Nike’s lightest basketball shoe ever. It weighs in at just 10.6 ounces for a mens size nine, thanks to new materials, including a super-thin, mostly one-piece TPU upper, as well as a minimalist outsole. More telling, it doesn’t FEEL like a basketball shoe.  Designed with soccer boots in mind, the sleek lowcut has all the heft of a high-end running shoe. Otherwise, much carries over from the previous model—Zoom Air cushioning front and rear, Flywire support on the sides, and extra support (and design elements) provided by heat-bonded overlays. “Kobe wanted the lowest, lightest basketball shoe ever,” says Avar. “That happened to coincide with my own philosophy, but I didn’t tell him that.”

We’ll give you a complete rundown on the trip later—it’s 7:25 a.m. here in Santa Monica and there’s still more to come—but for now, here’s some new photos of the ZK5 from the event. What’s with the grass, you ask? Check back soon.