Over the years Gilad Jacobs has learned to always keep his phone by his side. NBA players don’t operate on a typical 9-5 schedule. Sales opportunities pop up at random times.

Once, for instance, Jacobs met a player in the lobby of a Boston hotel. The player was in town to take on the Celtics and used his American Express Black Card to purchased three NormaTec units—one to leave with the team, one for home, and one to keep at his mom’s house—while sitting at the hotel bar.

Another time Jacobs got a call from an agent who was in the middle on negotiating a contract for a client. The player, Jacobs was told, was annoyed the deal hadn’t yet been completed. Jacobs was asked if he could maybe overnight one of his NormaTec units to the player, to help smooth things over.

Sometimes the calls come from Mike Mancias, a Cavaliers employee who serves as LeBron James’ personal trainer. Other calls will be from Celtics trainer Ed Lacerte or Knicks trainer Anthony Goenaga or one of the other myriad team employees Jacobs now counts as clients. Some even come from the players themselves. 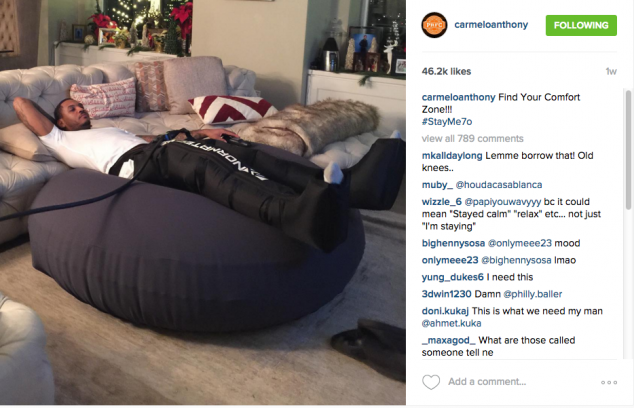 “People are constantly looking for ways to improve athlete performance,” Jacobs says over the phone on a recent Friday morning. “Technology has helped improve athlete gear and training. Recovery, we believe, is that next frontier.”

By “we,” Jacobs means the 25 or so employees he has working for him at NormaTec, the Newton Center, MA-based company that designs and manufactures the futuristic-looking recovery systems now populating nearly every locker room and practice facility across the League. In the age of bigger, stronger and faster, NormaTec’s computerized massage machines have become an indispensible tool for both players and teams.

And it all started on a napkin in a Dunkin Donuts in Tel Aviv.

The company is the brainchild of Jacobs’ mother, Laura, a rehabilitation physician who also held a PhD in bioengineering. She had spent the majority of her professional life working as the Chief of Rehab at New Jersey’s Cooper University Hospital (she traveled back and forth from Israel). Compression—which helps regulate blood flow in a way that speeds up recovery—was a major part of her life. But she couldn’t understand why professionals like her were still being limited to using bandage wraps and other relics from the past.

Finding a solution became her life mission and one morning, just about 18 years ago, the answer came to her. She jotted down her thoughts and soon after NormaTec—named after Laura Jacobs’ mother, Norma—was created. The machines took care of everything on the science end by essentially serving as personal massage therapists. Also, and perhaps more importantly, they were affordable, user-friendly and sleek.

Gilad graduated from the University of Pittsburgh in 2005 and immediately joined the new family business. He worked his way up the ranks and took over following his mother’s death, from cancer, four years ago.

By then, Gilad had already taken NormaTec from the fringes of showrooms into the center of the sports world.

“We never paid anyone and didn’t do any advertising,” he says. “It was just me going around, telling trainers about it, letting them try it out and then relying on word of mouth.”

Eventually teams like Jacobs’ hometown Celtics were interested. The Knicks, too. But Jacobs’ big break came in June 2011 when he met Mancias at a trainer’s convention in New Orleans. Mancias told Jacobs what he and LeBron were looking for. Jacobs told Mancias how he felt NormaTec could help.

Less than two weeks later LeBron was hooked, giving Jacobs all the marketing he would ever need. 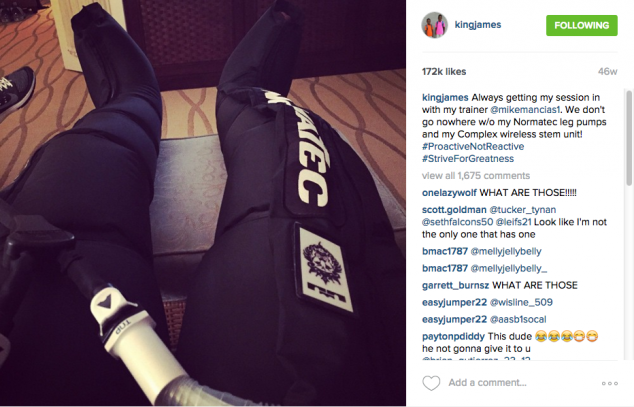 Now Jacobs has clients on every team. Cavaliers trainer Steve Spiro points out how easy Jacobs is to work with, and adds that every veteran in Cleveland uses NormaTec. In Boston, the Celtics have an entire NormaTec room so that players no longer have to wait for their massage.

“It’s been quite effective for us,” Celtics trainer Ed Lacerte says. “It’s really helped in injury and recovery management.”

It’s starting to trickle down to basketball’s lower ranks as well.

“I started using the NormaTec units in high school,” says Timberwolves center and last year’s No. 1 pick Karl-Anthony Towns. “I noticed right away that they helped me recover a lot faster and feel the wear and tear less.”

Both Lacerte and Spiro are quick to point out that NormaTec hasn’t replaced the need for massages but is rather just another tool they can use.

But for Jacobs, replacing massage therapists was never the goal. NormaTec was about making recovery easier and more accessible. So when an athlete like James requests three units so that he could keep one with the team, one at home and take one on planes, Jacobs can smile and know that he’s living out his mother’s dream.

“We were unfunded when she first made the company,” Jacobs says. “She did well beforehand, but those few years were tough. She’d fly back and forth from Philly to Israel every two weeks.

“To see how far we’ve come is really touching.”

Julius Randle Explains Who His Thumbs Down Sign Was For