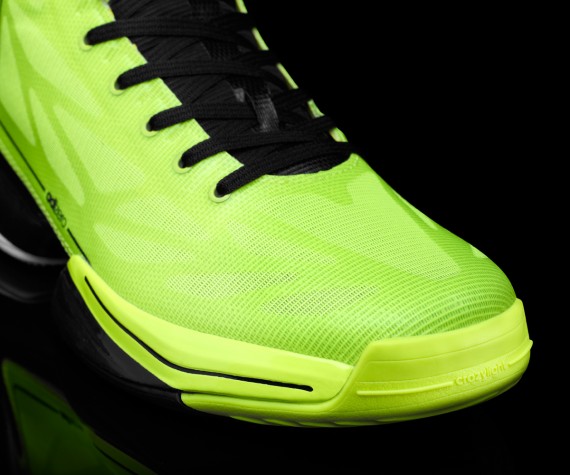 Adidas Basketball today unveiled its newest shoe, the adizero Crazy Light 2. Weighing 9.5 ounces, it replaces its predecessor—the adizero Crazy Light—as the lightest shoe in basketball. We’ll have more extensive coverage of both the release and the shoe itself, but for now, check out the snapshots above and details below, courtesy of our friends at adidas.

In addition to its lighter weight, the new adizero Crazy Light 2 is stronger, more aerodynamic and comes in brighter colors. The super-light sequel will be available May 24.

“Elite athletes are elite athletes because they’re always fighting for that competitive edge,” said Lawrence Norman, adidas vice president of global basketball. “The adizero Crazy Light 2 is that competitive edge. The shoe had a huge performance and style impact during college tournaments and we can’t wait for fans to see the adizero Crazy Light 2 in action during the NBA playoffs. When every second of every game matters, this shoe delivers faster play, stronger cuts and greater support.”

“In the league, every game matters and you don’t want anything weighing you down on the court,” said Philadelphia 76ers point guard, Jrue Holiday. “Putting on the adizero Crazy Light 2 gives me that speed and confidence I need when it counts.”

“The adizero Crazy Light 2 is light done right,” said the shoe’s designer, Robbie Fuller, adidas advanced footwear concept designer. “We not only made it lighter, but we made it stronger and more aerodynamic. We work closely with the adidas Innovation Team (aIT) to continuously innovate and find that perfect weight-to-strength ratio that gives athletes better command and agility on court.”

The increased strength of the adizero Crazy Light 2 comes from an enlarged asymmetrical SPRINTFRAME, allowing for maximum motion control. Designers added volume to the midsole for a more supportive base. The new aerodynamic three-layer SPRINTWEB is the thinnest ever, with a tighter web layout that gives players enhanced vertical and horizontal strength. Overall, the shoe’s new geometry allows for maximum weight savings, energy return and motion control.

Five colorways go on sale May 24 for $140, including the electricity color seen at the McDonald’s All American Games, along with a metallic finished black/white/red look and three others. The adizero Crazy Light 2 will be available on adidas.com and at Foot Locker, Eastbay and other leading retailers.

The new adizero Crazy Light 2 also features a micoach speed_cell(TM) capability, helping players measure, view and share their stats. micoach technology includes an advanced accelerometer that captures 360-degree movement and measures performance metrics during practice or gameplay. The chip’s unique on-board memory stores up to seven hours of data, wirelessly syncs with the user’s smartphone and uploads performance stats that can be shared through Facebook and Twitter.