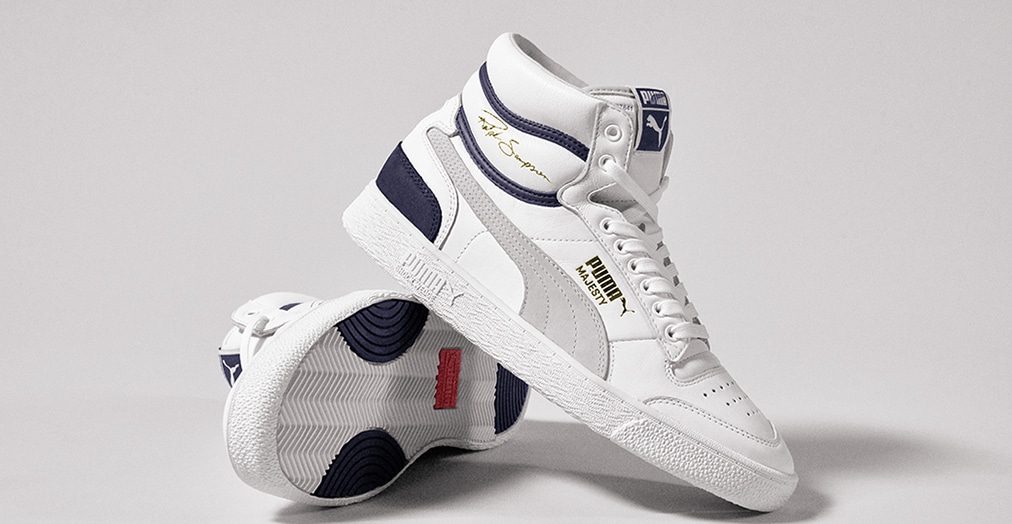 Ralph Sampson was ahead of his time. Standing 7-4, he wasn’t a traditional center. His game was fluid, operating with advanced smoothness. Sampson moved and hooped unlike any other big man playing in the 80s. And he was never able to find a sneaker that properly supported him. Until he was selected by the Houston Rockets with the number one overall pick in 1983. That’s when he agreed to sign an endorsement deal with PUMA, one that give him his own pair of sneakers specifically designed to his size 17 foot.

Now the PUMA Ralpha Sampson OG is back for the first time in over 30 years. We caught up with the Hall of Famer to talk about the return of his kicks.

SLAM: What do you remember about the process of creating your sneaker back in the 80s?

Ralph Sampson: The process, back then, was interesting to see. You had Converse with the Dr. J’s and all of that was looming around. So when I got to the NBA, I thought I was gonna go with another brand and then PUMA swooped in and took it on and became a very good shoe to wear. I wore Pro-Kids in college. They were owned by Stride Rite and Stride Rite went under. PUMA came in at the last minute and gave me a deal I couldn’t refuse. My first couple of weeks in the NBA, I wore a shoe that was a prototype of the shoe that I would end up having. Within a two-week period of time I had the shoes that I needed to wear that had my name on it.

SLAM: What role did sneakers play for you growing up?

SLAM: You accomplished a lot during your career. All you have to do is say three letters; H-O-F. Where does having your own sneaker rank among everything else you did?

RS: As I look back, I didn’t plan to be a Hall of Famer. I was granted that due to my career. That was just a great honor for me. There are very few to have a shoe named after you, back then and even today. The success that PUMA had back then was amazing and it’s so good to see them back in the basketball world. They have a great product, great stories and a great passion for the game of basketball.

SLAM: How did this retro release get started?

RS: I had called them a number of years ago to see if they were getting back into the [basketball] business. They were changing personnel. They said they weren’t. Then out of the blue, a few years later, I don’t even know how they got my number, but one of the guys in the office called me. I was in Los Angeles at the time and I got a call. I didn’t know the number so I didn’t answer. I looked at my voicemail and it was ‘I’m so-and-so from PUMA, give me a call back.’ I had heard that they were back and they had signed Clyde Frazier to a lifetime deal. So I called them back. We had a couple of meetings on the phone, I flew to Boston, had a couple of meetings. And then much later we ended up with a pretty good deal.

SLAM: You definitely got a good deal. You got your own kicks. How do you describe your emotions now that your sneakers are back?

RS: It meant something for me to wear a shoe that was by a company like PUMA that had a culture, a history. Players like Martina Navratilova. We had a lot of people that wore the shoes that had a meaning behind their name. I think that’s what it’ll continue to mean today.

The Ralph Sampson OG drops exclusively at KITH on April 13 and will be available globally on PUMA.com, PUMA stores and retailers starting April 27.