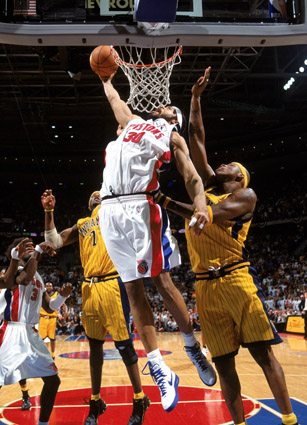 There was a time when I believed that being born with big feet was a curse. (No, not for that reason.) I would visit Foot Locker or Champs and find a pair of shoes I wanted to buy, only to be told that they didn’t have any in my size 13. But my life changed for the better when I signed on at SLAM and met a certain someone at Nike who shall remain nameless. When he discovered that I wore size 13s, he mentioned that I shared a size with a prominent Nike athlete: Rasheed Wallace.

A few weeks later, a box of Rasheed’s shoes—one pair actually pulled from a shipment headed for Sheed—arrived at my office. I was pretty excited, not only because I’ve been a Rasheed Wallace fan ever since he got thrown out of the McDonald’s All-American Game back in 1993, but because Rasheed has always played with such passion. The mainstream media generally roasted him throughout his time in Portland for losing control on the court, but they rarely mentioned things like his considerable charity work in his hometown of Philly. But would you rather have a guy without emotion or a guy with too much? Me, too.

And then there were the shoes, money. Rasheed has damn near always worn what are in my opinion the coolest shoes in the NBA—in fact, Nike lists him as the sole “signature athlete” for the Air Force 1 line. While the rest of the League jockeyed to find what was new and (allegedly) hot and fresh, Rasheed kept it realer than Real Deal Holyfield, rocking the high-cut Air Force 1s for as long as I can remember. Technological advances came and went, and surely there have been significant improvements since the 1s first dropped way back in 1982. But Rasheed has stubbornly refused to upgrade. And that, in our opinion, is a Hall of Fame-worthy stance.

Before I was lucky enough to tap into the player-exclusive pipeline, I once asked Sheed if he wore specially designed or engineered shoes. “I just wear the regular Air Force 1s, no special cushioning or nothing,” he responded. “I’ve just been wearing these shoes for so long that my feet are used to it, I guess. My favorite shoe of all time.” Although he supposedly added some cushioning inserts this spring when he was nagged by plantar fasciitis, they were otherwise the same inside. And as someone who regularly wears Sheed’s game shoes, I will testify that they aren’t necessarily the most comfortable shoes of all time. But they look so amazing—with tongues that seem to stretch to the knee, coated in gleaming patent leather and customized with a fresh silhouette of Sheed shooting his unblockable fadeaway J—that the look really makes up for the feel.

It all goes back to emotion. Rasheed is perhaps the only man in the NBA willing to wear shoes that don’t actively enhance his performance, just as he’s pretty much always been the only guy unafraid to wear emotions that don’t actively enhance his status amongst officials and the media. If Rasheed could play under containment, he’d probably be more popular, draw less ire from columnists who don’t understand why he can’t be contained. But he can’t, so he doesn’t, and he won’t. Which is why I like him so much.

Last spring, as Sheed and the Pistons marched toward the NBA Finals, I put in an email to my man at Nike requesting a pair of the new white/blue joints. I finally got out to Detroit for Game 3, made my way into the Pistons locker room and spied Sheed’s white/blues, the ones with “X-Millennium” graf’d on the side in black Sharpie. My own shoes arrived a few weeks later. Now I just need to find a Sharpie.