The Jordan Brand Classic is back. On Friday in Brooklyn, the best high school basketball talent from around the country—and the world—will share the Barclays Center hardwood, a celebration of the next generation of stars.

Tuesday night in Brooklyn, Jordan Brand athletes Ray Allen and Maya Moore helped kick off JBC Week by greeting the game’s participants with inspiring words—and lots of selfies and Snapchats. Allen, one of the first athletes to ever sign to Jordan Brand, urged the kids to savor the experience this week.  “Take the time to enjoy these moments,” Allen said on the mic, “because they go by fast. But what I want you also to know is, these moments are 10 percent of our lives. The other 90 percent, we’re grinding.”

It’s the fifth consecutive year the event will take place at Barclays Center, and the third event that will include a Girls All-American Game (a new tradition that Moore was instrumental in starting). And this time around, players will wear the Air Jordan XXXI “Flight Guy” colorway during practices and the games on Friday.

Inspired by Jordan Brand’s 30-plus years of transcendent style and pinnacle performance, Jordan has dubbed this year’s class of athletes the “Class of XXXI.” The “Class of” campaign matches up a player’s senior year of high school with that year’s Jordan release. For example, Russell Westbrook is Class of XX and Kawhi Leonard is Class of XXIV. 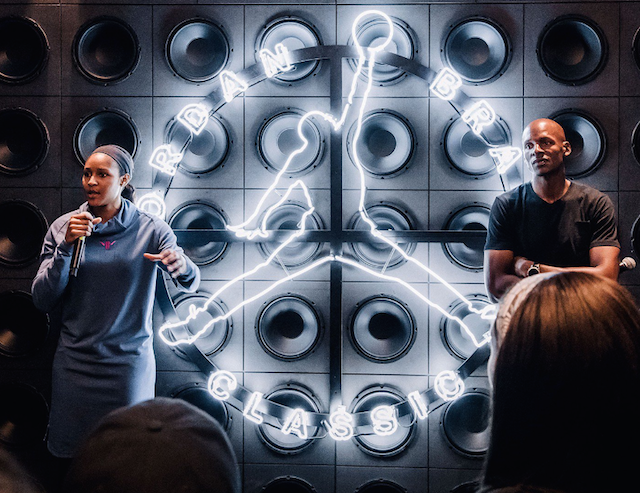 Before closing his remarks to the players on Tuesday, Allen (Class of VIII) mentioned SLAM in particular as a source of great motivation for his legendary career.

“SLAM Magazine is somewhere around here. When I got drafted—I don’t know if you guys have seen the cover from 1996, SLAM Magazine, it had everybody in my draft class,” Allen told the kids. “On the inside, it had a list of accolades. Most likely to win MVP, most likely to win an NBA Championship. My name was nowhere on there except for one spot, and it said Most Likely To Fade Into Obscurity. Now, I knew what obscurity meant, but I had to look it up in the dictionary because I had to make sure I knew what they were saying. That was one of the best things that ever happened to be. Because, basically, they told me I wasn’t going to be sh*t. Pay attention to stuff people say negatively about you. Not good. Good doesn’t make you work. Negative will piss you off just enough to make you work your ass off.”

Afterwards, we sat down with both Moore and Allen to talk about the Jordan Brand Classic experience, the Class of XXXI campaign, the NBA MVP race and much more. You can listen to those interviews below:

The national game of the 16th annual Jordan Brand Classic will tip off at 8 p.m. ET on ESPN2 on Friday, April 14. Photos courtesy of Jordan Brand.