More Details About Return of Reebok Answer I (KICKS) 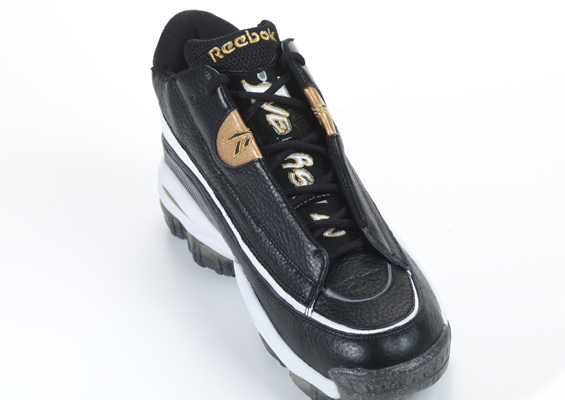 “I wonder what they’ll say about this one?”

When Reebok launched the Answer I in 1997, the focus was on firsts.

The commercial in discussion, an Answer I TV spot that aired often throughout the 1997-98 NBA season and can be seen above, features Iverson explaining how he works on his crossover. As he talks the viewer through the cross, Iverson demonstrates the move on what is a custom-built glass surface. The glass cost Reebok $100,000 to procure for the shoot.

“When the camera went off, I thought the glass had cracked,” a laughing Iverson told SLAM this past spring. “That scared the hell out of me, man.”

The glass, as it turned out, was good. The commercial spot was good. And the Answer I was good.

Though the Question Mid, released during Iverson’s rookie season in 1996, was his first signature sneaker, in many ways it wasn’t really a signature in the classic sense of the word. Due to the short span of time between his signing with Reebok and the sneaker’s release, Iverson didn’t get to work on the process of designing the sneaker. With the Answer I (also known as the Answer DMX 10) though, Iverson had the chance to work with the design team at Reebok from conception to realization. That’s why it’s the the first signature in his official line of Answer sneakers.

“Outside of Michael [Jordan], this is the second-longest running franchise in the game,” Krinsky said of Iverson’s Answer line. “And to think it was all just a dream on a piece of paper that ended up becoming a really big deal.”

Said Iverson, who acknowledges it all started with the Answer I, “I never though I’d be on close to the same level as Mike when it comes to sneakers, but that was always my dream.”

When it comes to the Answer I’s branding, the transition from the Q logo used on the Question to the I3 logo used on the rest of Iverson’s signature Reebok gear, starting with the Is, was all part of a thematic approach to marketing Iverson. “[David Falk, AI’s then-agent,] wanted Allen to be synonymous with speed,” said Krinsky, “The I3 was [designer] Scott Hewett’s interpretation of speed.”

Said Hewett, “We were just thinking about the road, the interstate. Like, the world is yours, basically. The road is endless.”

The Answer logo would stick, as would the nickname, a perfect compliment to the star guard’s longtime “The Question” moniker.

“When fans first called me ‘The Answer’ I knew it was a name that carried the weight of the city’s hopes and expectations with it,” said Iverson. “Every time I laced up my Answer 1s, I was reminded that I had a responsibility to my team, my city, and my fans to live up to that name.”

Iverson’s play while wearing it and the I3 logo aside, one of the most memorable aspects of the Answer I is its revolutionary usage of DMX 10 moving air technology. Until that point in time, DMX—a proprietary technology invented by Paul Litchfield, the man behind Pumps, too—was mainly used in running shoes.The adaption of it to the Answer I provided a new level of comfort and cushioning that Reebok had never offered before.

So…why the Answer I history lesson? If you hadn’t guessed (or read) it by now, Reebok Classics will be re-releasing the icon sneaker for the first time in its original form. The black/gold colorway is set to go on sale on May 24, 2013, at select retailers (Finish line, Foot Locker, Champs, etc). It is slated to cost $150.