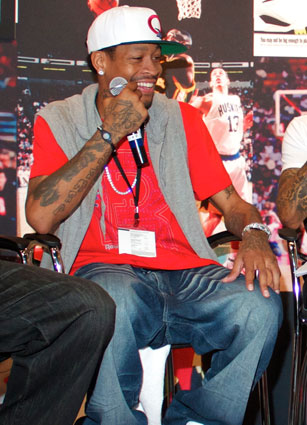 Attempting to shine at the Project Las Vegas trade show is no small feat. Some of the coolest brands in the World stormed Sin City this week to set up shop and attract buyers, collaborators and media. The 250,000 square feet at the Mandalay Bay hotel Convention Center transitioned into a small city of brands with creative booths from end to end.

Reebok had a prime booth at the event, decked out in hot summer colors and featuring many of their retro sneakers and gear. The brand caused a nice stir at the event on Monday afternoon with a press conference featuring their elite partners. NBA legends Dominique Wilkins and Allen Iverson joined hip-hop stars Rick Ross and Tyga to celebrate the brand’s retro line. The event was curated and emceed by Reebok Creative Director Swizz Beatz, who has helped the brand gain momentum in the past year and a half with his vision of fashion, art and hip-hop coming together with Reebok’s great archive of product.

Influential bloggers and media types filled the Reebok booth to capacity with DJ Runna setting the mood right with hits and alcohol flowing from the bar.

The evening began with Reebok Vice President of Sports Entertainment Marketing Todd Krinsky taking the mic to welcome everyone in attendance. I first met Todd in 2005 in Los Angeles when I interviewed AI for our historic KICKS 8 cover, celebrating his 10th signature shoe with the company. He has been with the brand for 20 years, through the highs and lows, and is still extremely passionate about what Reebok stands for and its future growth. Krinsky understands that Reebok still has much work ahead to achieve its ultimate goals but he is very pleased with the momentum they have established during the past year, fueled by Swizz’s creative vision.

“The first gentlemen I want to bring up is a huge friend of the brand,” Krinsky began. “He’s not an endorser. He’s not someone who just gets in photo shoots with us. He’s really a part of our brand. He’s the creative director of Reebok Classics. What that means is he’s really involved with what we do from campaigns, to people that we decide to sign, to the product we make like, curating his own line with the Basquiat collection. Swizz is an incredible powerful machine that is involved in all aspects of culture. It’s great to be able to work with someone like that. He’s a personal friend of mine somebody who has tremendous passion and drive. A lot of what you’re going to see today is what Swizz has done with Reebok for the last year and a half.”

With DMX pumping through the speakers, Swizz stepped onto the red carpets on stage and reflected on his growing partnership with the brand.

“I want to bring Reebok back to the culture where you can go to the store and have a major selection of things that’s cool,” he explained. “For a long time, let’s be honest, the brand has not been cool. We got the snap-backs up and running, the gum bottoms up and running, we have super assets that we brought along with the team. We have Tyga, we have Ross, myself, Alicia Keys—super collaborations coming down the pipeline. We have Basquiat, we have Keith Haring. I thank the brand for letting me explore art through fashion, because art is fashion. It all falls under the same umbrella. We can all relate to art and fashion.”

Swizz gave a quick shout to Pusha T, who was hidden in the crowd of media members before bringing Nique out. The human highlight film clearly cherishes his association with the vector.

“Reebok has been in the community for a long time,” Wilkins said. “Over 20 years ago, they refurbished my old playgrounds in Baltimore, MD. So they have been a part of the landscape for a very long time. So, for me to wear their pump shoe in the Slam Dunk contest, winning a scoring title, that was a pleasure. To wear something that is yours to be a part of. We feel like we’re lifers here. We’re not ever going to wear anything but Reebok.”

Next up was The Answer. Still fresh to def in a 3XL tee, the baggiest jeans in the building and a fresh pair of red and blue Questions, it was thrilling to see. When we spoke for that KICKS cover, Allen was extremely proud that his success with Reebok helped open up a lane for artists like Jay-Z to establish a relationship with the brand. “I’m able to open the door for guys to come in and have their own sneaker by being rappers,” he told me in ‘05. “It makes me feel good. But it says a lot about Reebok as well. That they’re willing to let people come in and widen their horizons.”

That history has transcended into the relationship the brand now has with Swizz, who has brought in Tyga and Ross to take Reebok to new heights.

When he wasn’t blinding the crowd with his watch and pinky ring, Rozay was thoughtful in expressing his relationship with the brand, saying it grew out of curiosity and respect for Swizz. “For the last year or two, I’ve been most definitely watching what Swizz Beatz has been doing with the brand,” the Bawse said. “You know, it eventually spilled over to Maybach music. Reebok embraced our movement, came together and helped us put a few visuals together, a few videos together. The way I looked at it really, was that Reebok invested into our culture, into our future. This was before we were business partners. It was organic and I was just saluting what Swizz was doing, this entire movement. The history just spoke for itself. It’s one of the better moves that I have made in the last few months that I’m excited about. I’m here and most comfortable in this arena, but now I’m rocking with the No. 1 brand in Reebok. We back.”

Ross said he will be developing a big and tall line for the brand as well as his own signature sneaker, likely to be called, “The Rozay.”

Tyga will be expected to bring in the youth movement with his trendsetting style and recent rise in the hip-hop game. “Reebok really cares about the culture and the streets and that’s really what it’s about right now,” he said. “If you don’t got the streets, you don’t got the fans and you don’t got the people. I’m excited to be a part of the whole Reebok retro thing.”

“From his sneakers to his jewels, I got to commend my little homie,” Ross said with a smile.

“He’s definitely doing his numbers,” Swizz quipped, before finishing out the presser with the reason he decided to get involved with Reebok.

“I wanted to work with a team where I could touch the culture more,” he said. “People were like, ‘Why you going with Reebok, they’re not poppin’ right now?’ I thought it was a great opportunity that they weren’t poppin’ at that point ’cause I’m a builder. When you’re a builder, you know how to take structures and refurbish them to something that is monstrous or monumental. I like to take the risks. It’s easy for people to just jump into the Benz that’s already done. Let’s take something like an old school Impala and make it look pretty and then put that on the streets.”

With the press conference over, it was time to party. A few hours later, everyone reunited at Pure nightclub at Caesars Palace for a concert featuring Swizz, Tyga and Ross. The open air club, bristling with all kinds of heat and a stocked open bar, was immediately filled to capacity with guests for at least an hour before anyone even grabbed a mic. With DJ Runna on stage, Tyga stepped up wearing Ex-o-fit’s and set the night on fire with a few verses, including “Faded” and “Rack City.” Swizz—in an ill pair of customized Twilight Zone Pumps—followed up and was joined by Pusha T for a few songs before Ross stepped in to close the show.

Cats in the crowd were on full tilt by then, spitting every word that came out the Bawse’s mouth. Rozay—sporting some Workout joints—had a nice surprise in store for the crowd, inviting Bun B up on to the stage to sing his verse on “Big Pimpin,” definitely one of the many highlights of an incredible evening. Rozay even brought magician David Copperfield to the stage at one point for a salute from the crowd. “This is a motherfucking icon—in his field, he’s the greatest to ever did it,” Ross screamed, setting him up for a version of his song “Black Magic” to close the show.

Swizz then returned to the stage to thank everyone for coming out, especially his Reebok team and all of the performers. He definitely delivered on his promise, giving us all a night to remember.