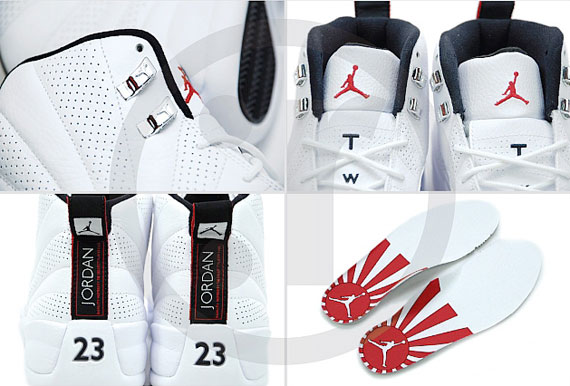 It’s not an out of the ordinary thing when Nike or Jordan Brand pushes a release date back. Hype, or the lack of it on a release can have the company reconsider quantities. Sometimes it doesn’t mesh with the launch of another shoe. These things happen.

So when JB announced earlier this month that they were pushing back the release of the Jordan XII Rising Sun, it didn’t raise very many eyebrows. The shoe was slated to drop this weekend and is now being held until sometime in November. The reasoning behind this delay is unique, though.

As was discussed when the shoe was released, it takes its inspiration from the Japanese war flag. JB took it a step further, putting an homage of sorts to the flag on the white insole. This didn’t sit well with Japan’s neighbors, China and Korea. Protests over the shoe’s release there came out of both countries, who were under Japanese rule up until the end of World War II.

JB pulled the insole on the Asia release in favor of an all-white insole with a red Jumpman on the heel. They didn’t change out the insole prior to shipping their product to the rest of the world, though, and have now put the brakes on the shoe’s release while they try to figure out what to do about the insole.

Meanwhile, what was a shoe that got a mixed reaction at best out of sneakerheads, could become a rare collectors item for Jordan fanatics. Things could get pricey with the pre-release shoes that are already on eBay in the coming days and weeks.

We regret to inform you that the Jordan Brand is delaying the October 24 launch of the Air Jordan XII Retro collection, which includes footwear, apparel and accessories. The current Air Jordan XII Retro product that you have received is not approved for sale at retail.

Please ensure that this 10/24 launch product is not put on display or made available for purchase.

We apologize for this inconvenience and will be providing further direction on the product launch in the coming days.