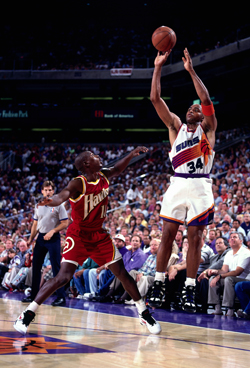 Even if he didn’t want to identify himself as a role model, Charles Barkley’s shoes certainly were: they succeeded in opening up the landscape for what a sneaker could look like. They weren’t necessarily sleek or stylish, yet they inarguably looked great. His shoes represented not only his game but a mentality. His shoes spoke for himself and the people wearing them. They said something to the effect of, “I probably can’t run past you. I could maybe jump over you. I can damn sure run through you.”

Barkley’s InYoFace game was as hard as the crack rocks that were infiltrating the era he played in. CB spoke about that and all sorts of societal problems. Controversial? Damn right. Honest? Yep, that too. Respected? Of course. You think Public Enemy front man Chuck D would have compared himself to just any random player? Never. Barkley took BS from nobody. CB told us he wasn’t a role model and clowned those of us who thought pro athletes should ever take the place of parents. He once tossed a dude through a glass window after that man threw a glass of ice at him in a bar. He argued with Sixers management and demanded a trade. He backed Republicans while Reagan and Bush No. 1 were in office. And people still showed him love.

Like his personality, Chuck’s game was overtly dynamic, compensating for his lack of height at power forward (he was listed at 6-6 but was at least an inch shorter) with intelligence, hops and confidence. He played with intensity and bravado during his years in Philly and his peak seasons in Phoenix. Dudes were intimidated by Barkley, and that was a great marketing tool.

Nike recognized the template his personality allowed. The shoes they created for him were mirrors of his aggressive, confrontational style. He had already been the headlining face of the Nike Alpha Force line, but it took years before he got his own official “this is mine and nobody else’s” shoe. But Nike made up for their folly with a breakthrough. In ’94, during his second campaign in Phoenix, Nike dropped the Air Max CB. It was a game changer. You know this one; this is the famous straitjacket shoe. Black, purple and white. It looked crazy as hell with those interlocking straps. As menacing a shoe as you’re likely to see, they looked different from anything that was out or had ever been out. Actually, they still do. And as with all classics, they have infinite staying power and you still see people rocking them. But only certain types of people can wear them and rock them with requisite swagger. They are only built for Cuban links…indeed. A year later (1995), Nike came out with the Air CB 34, more black and less purple than its predecessor but still a great shoe. More subtle in its barbarity, here’s a newsflash: It’s a classic, too.

Barkley should have been in the KICKS Hall of Fame a long time ago. It’s weird that he isn’t, but we’re not gonna cry over spilled milk or a missed buzzer beater. Seriously, after the Chi-town Dream Shatterer, who else has as many iconic and amazing sneaker moments under their name? In addition to the aformentioned I’m Not a Role Model commercial, he battled Godzilla, hosted a talk show with Humpty Hump (in which he interviewed David Robinson and the San Diego Chicken) and sang opera. Undoubtedly, his impact on the shoe industry has been powerful and helped set a standard that companies and newer athlete pitchmen are still trying to match.

He was the anti-hero’s hero. Sort of. Yeah he repped for the anti-establishment, but he wasn’t ever so radical to where the pretty people could totally tune him out. He was on the edge but never quite over, and because of that he stayed relevant in a world that needed someone of his stature to rep on and off the basketball court.

Chuck does TV now. He’s made about 100 T-Mobile commercials and keeps the laughs going during the NBA season on TNT. He still lets his opinion out. He was on CNN recently, appearing on the painfully clichéd “Blacks In America” series. Barkley still doesn’t mince words. He still doesn’t wear ties. Whatever. I still like his shoes. I wish they still made them.